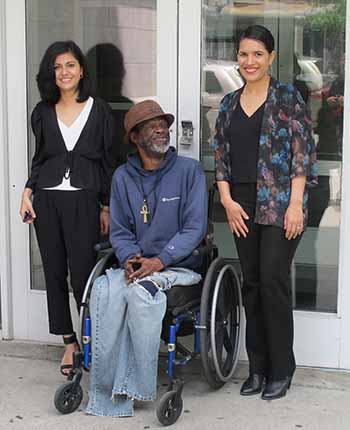 Tenants in a Bronx low-income building that has received almost $3.2 million in 421-a tax breaks are suing their landlord, accusing them of charging more than $80,000 in illegal rent increases.

The suit, filed May 24 by 12 residents of 1434 Ogden Ave., charges that the landlord, SCS Realty, LLC, and managing agent, Ogden Avenue LP, set rents in some apartments far above what’s allowed under the property-tax-abatement program, which required them to be rent-stabilized. It also alleges that the owners violated a 2007 agreement with the city Department of Housing Preservation and Development that set stricter limits on rents in order to keep the building affordable to previously homeless and low-income residents.

“Since the completion of this building in approximately 2007, not only has defendant SCS Realty, LLC avoided paying millions of dollars in taxes, they have also swindled plaintiffs by improperly registering the initial rents, unlawfully raising the rents, and overcharging plaintiffs in direct violation of state law and the regulatory agreements,” the suit, filed in state Supreme Court in Manhattan, says.

The 6-story, 130-apartment building, about 10 blocks from the subway in a hilly neighborhood near the Cross Bronx Expressway-Major Deegan Expressway interchange, opened in 2007. Rents were set at $561 a month for studio apartments, $599 for one-bedroom units, and $723 for two-bedrooms.

The apartments must remain rent-stabilized for the 25-year duration of the 421-a tax break, says Kulsoom Ijaz, a lawyer for Bronx Legal Services, which is representing the 12 tenants. The 2007 agreement with HPD prohibited the landlord from raising rents by more than the annual increases allowed by the city Rent Guidelines Board — specifically barring the 20 percent increase on vacant apartments normally allowed under rent stabilization rules.

Instead, the suit alleges, Ogden Avenue LP regularly raised rents on vacant apartments, such as a 24 percent increase on a two-bedroom apartment in 2010, when the maximum set by the Rent Guidelines Board was 6 percent for a two-year lease. The result, it says, is that the current rent is now $1,075 instead of $922, with accumulated overcharges of more than $12,000.

In two other apartments, the suit alleges, the landlord illegally registered the initial rent with the state housing agency at more than $500 above the actual rent, and then gave the tenant a discounted “preferential rent” that was still illegally high. In one, the initial rent was registered at $1,250 instead of $720, and has since been increased to $2,134. The current tenant is paying $1,123 a month—roughly $200 more than the legal rent, the suit says.

“The pattern strongly demonstrates that this is a willful practice by the landlord,” says Bronx Legal Services staff attorney Cristina Castro. “We think this is the tip of the iceberg.”

Enforcement of the 421-a program’s rent regulations has been spotty. Last October, the ProPublica investigative-news service reported that in almost two-thirds of 6,400 buildings receiving the tax reductions, landlords had never received a certificate from HPD confirming that they had registered the apartments with the state as rent stabilized. HPD had a years-long backlog of applications, it said, and the city Department of Finance let owners claim 421-a tax breaks without the certificate. In November, the Finance Department said it would give roughly 3,000 properties without certificates until January 2018 to comply.

The Bronx Legal Services’ lawyers first noticed the problem at 1434 Ogden Ave. last year, when they were defending a tenant facing eviction for nonpayment and requested a history of the apartment’s rent from the state. They “found a clear overcharge,” says Ijaz. Surveying about 25 tenants in the building found “it was pretty widespread.”

“I know I’m being overcharged,” Handy, wearing a brown leather hat and an Egyptian ankh pendant, says as he sits in his wheelchair in the lobby and greets other tenants. He pays $240 of his rent out of his disability check, and the rest is subsidized.

“They have people you don’t know paying the other side of your rent,” he says. “You start getting letters with threats… you don’t know where it’s coming from.”

Tenants in the building get rent subsidies from public assistance, the federal Section 8 program, and Project Renewal, a nonprofit that provides housing for homeless people. Many “aren’t aware that they have these protections” against being overcharged, says Carolyn Norton, deputy director of Bronx Legal Services’ housing unit.

The lawsuit seeks an order reducing the rents to the legal maximum, a permanent injunction barring the landlord from collecting rent above that, and damages of triple the total overcharges, plus interest.

The 421-a tax breaks expired last year, but a new version was revived by Governor Andrew Cuomo and passed by the state legislature in April, dubbed the “Affordable Housing New York Program.” The city’s Independent Budget Office estimates that it will cost $120 million annually (or $1.2 billion over a decade) in lost revenue, in exchange for developers building 2,500 “affordable” apartments each year.

A version of this article originally appeared on the Village Voice Web site.