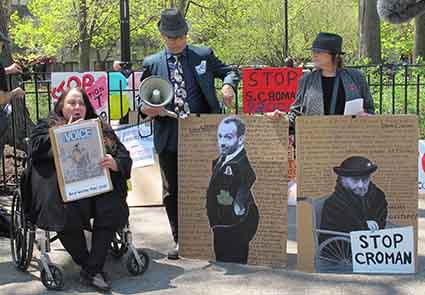 Manhattan landlord Steve Croman, whose harassment of tenants in the more than 140 buildings he owns has made him notorious as one of the city’s most vicious owners, turned himself in May 9 after being charged with 20 felonies related to an alleged loan fraud.

Croman and his mortgage broker, Barry Swartz, 53, are accused of providing false and fraudulent information about his income in order to get more than $45 million in bank loans. The indictment alleges that they inflated his income by claiming that rent-stabilized apartments were occupied by market-rate tenants and that commercial tenants were paying more rent than they actually were. Both face up to 25 years in prison.

If Croman had to lie about market-rate tenants living in apartments that were actually rent-stabilized, it wasn’t for lack of trying. The arrest coincided with a civil suit filed against Croman by state Attorney General Eric Schneiderman, accusing him of leading “an operation that wields harassment, coercion, and fraud to force rent-regulated tenants out of their apartments and convert their apartments into highly profitable market-rate units.”

The lawsuit seeks to force Croman to pay “millions of dollars” in damages and restitution to tenants and to “give up his holdings” and put his company into receivership under independent management, said a spokesperson for the Attorney General’s office.

“The scope of this extraordinary indictment reveals not only Mr. Croman’s greed, but his lack of compunction and the sadistic pleasure he and his minions took in their illegal efforts to increase his profits,” Robert Pinter, tenant association representative at 309 East 8th St., said in a statement released by the Cooper Square Committee, a Lower East Side housing group.

Schneiderman called Croman the “Bernie Madoff of landlords” at a press conference announcing the suit. It alleges that the illegal tactics Croman used included harassing tenants into giving up their apartments in exchange for token buyouts; giving employees and agents incentives to get tenants to take buyouts; and “repeatedly filing baseless lawsuits” against tenants. In some cases, his office said, Croman’s office created “a deliberate fraud upon the court” by refusing to deposit tenants’ rent checks and then trying to evict them for nonpayment.

According to the suit, Croman employees called rent-regulated tenants “targets.” Croman’s “tenant relocation specialist,” former police officer Anthony Falconite, once emailed a property manager that getting tenants to take buyouts was a “team sport,” and she responded, “I know that!! Who’s our next target? We have to start lining them up!!!”

Falconite, the lawsuit alleges, regularly used “deceptive and frightening tactics to intimidate rent-regulated tenants.” It says his text messages with property managers show that he often posed as a repairman, building manager, or UPS delivery person to get into to tenants’ apartments, where he would then accuse them of violating their lease. 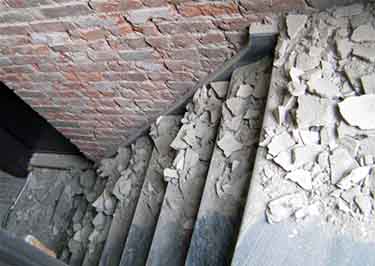 It also accuses Croman of what has come to be known as “harassment by construction.” Once a tenant moved out, the company would renovate the vacant apartment in a way intended to persuade other residents in the building to leave. It says Croman’s companies did construction without obtaining permits at least 175 times; filed false documents with the Department of Buildings “on dozens of occasions”; regularly told workers to ignore stop-work orders and conceal unlawful construction; and “defied” orders from the city Department of Health to deal with lead hazards created by the work. The department found dangerous levels of lead dust in Croman’s buildings more than 20 times, sometimes as much as 65 times the legal threshold.

“Buildings acquired by Croman followed a familiar pattern, with most of the tenants moving out within a year of his acquiring them,” Cooper Square Committee executive director Steve Herrick said in a statement. The Stop Croman Coalition, a group of tenants that estimates he owns more than 185 Manhattan buildings through different shell companies, describes a four-step harassment process: first, badgering elderly and disabled tenants to move out; second, turning the building into a 24-hour construction site; third, cutting off services like heat and cooking gas; and fourth, “an endless stream of frivolous and bogus lawsuits.”

“I’m stunned,” coalition cofounder Cynthia Chaffee, who has endured more than a decade of harassment, electrical and gas outages, leaky ceilings, and construction dust, said of the indictment. “It was so overwhelming all these years.”

Tenants in several of Croman’s Lower East Side buildings also fought back against him. At 309 East 8th St., they brought an HP action in Housing Court to demand repairs when dust generated by renovation work caused health problems for several tenants, and “reckless demolition” in the basement caused gas leaks that led to a four-week shutoff. Tenant associations at 159 Stanton St., 529 East 6th St., 60 Avenue B, and other buildings helped the Attorney General’s office document harassment, Croman’s mortgage problems, and unpermitted, disruptive, and dangerous renovation work, Cooper Square said.

“We hope this indictment will send a strong message to other predatory-equity landlords like Steve Croman,” said Brandon Kielbasa, Cooper Square’s director of organizing.  He added that tenants should, “Keep fighting!  Don’t ever stop working to shine a light on the wrongful acts of these unscrupulous landlords. Your tenacity makes these big wins possible. Your efforts made this arrest possible.”

“I hope all this will enforce change,” says Chaffee. Croman and similar landlords, she says, could not exist without city agencies and courts failing to enforce the laws that protect tenants.