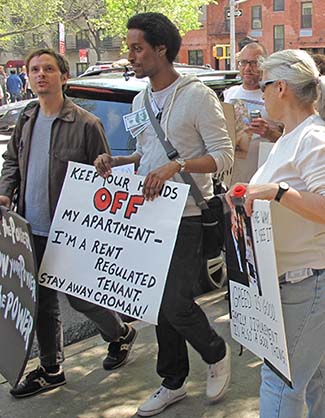 About 75 people marched through the Lower East Side May 3 protesting harassment by landlords Steven and Harriet Croman and their 9300 Realty, which they say is notoriously aggressive even by the standards of landlords whose business model depends on ousting rent-stabilized tenants.

Croman owns about 175 buildings in Manhattan, most heavily on the Lower East Side and in the East Village, Greenwich Village, and Gramercy, and he has recently been buying buildings in Hell’s Kitchen, the Upper West Side, and East Harlem. He has brought at least 700 known cases against tenants in Housing, Civil, and Supreme courts, says Wasim Lone of Good Old Lower East Side (GOLES), which organized the protest. “His modus is buy and deregulate using the full gamut of harassment tactics.” These include persistently knocking on tenants’ doors to offer them buyouts, threatening them with imminent eviction, frivolous litigation, deprivation of services, and renovations of vacant apartments that pollute their homes with dust and debris.

Tenants have come to the Cooper Square Committee with stories about “ceilings falling down, utilities cut off, and staircases being pulled out of buildings,” says organizer Brandon Kielbasa. Croman also employs what are euphemistically called “tenant relocation specialists.”

“They just want everybody out right now,” says Philly, a Lower East Side performance artist who’s lived at 141 Ridge St. since 1984. “They did a gut renovation below me and my apartment is full of dust.”

Croman, who bought the 13-unit building in October 2012 for $3.9 million, has gotten four tenants to leave so far, says Silvana Jakisch, who’s lived there for nine years. “They’ve been telling people ‘you have a week to move out or your stuff’s going to be on the street,’” she says. “These kids didn’t know the law, and they panicked.”

He’s trying to evict a fifth tenant, Jakisch adds, by refusing to renew his lease, claiming that because his rent has risen to over $2,500 a month, he’s no longer covered by rent stabilization.

“Steven Croman has brought repeated baseless and frivolous lawsuits against me,” says George Tzannes, another Lower East Side resident. “Two holdover actions and a nonpayment eviction action. Now I am fighting a second nonpayment action based on his own accounting errors that he refuses to correct after agreeing to in court and also after DHCR ordered him to. He must have a robo-harassment process that runs on autopilot. I’m out $25,000 in lawyer fees, and none of his actions ever went to trial. He drops them after dragging the case out, hoping to wear you down financially and emotionally until you leave the apartment.”

Chaffee, 63, and her husband, who have lived at 346 East 18th St. for 37 years, have been in court with Croman literally “from the day he took over the building” in 1999, she says. In 2012, he filed a nonpayment case against them even though they’d paid all their rent. Croman dropped the case when the couple showed up in court, but it meant that Chaffee, who uses a wheelchair, had to travel there. The company is still sending them rent bills claiming they owe almost $19,000, she says.

When Chaffee filed an HP action against Croman in 2013 to force him to make repairs, after enduring almost two months without gas in the fall of 2011 and two consecutive winters where they had no heat or hot water on more than 30 days, the company failed to show up in court, claiming it had never received notice. The company also accused Chaffee of causing the damage herself by ripping up linoleum on her kitchen floor—although the property manager who made the accusation had never been inside the Chaffees’ apartment, and saw the linoleum was intact when she and a city housing staffer visited nine days later, according to court papers Chaffee filed in response.

Croman uses these tactics on commercial tenants too, says Nelida Godfrey, who owns a Peruvian restaurant called Lima’s Taste in Greenwich Village. “They almost have a formula,” she told a rally in Tompkins Square Park before the march. “They give you a ten-year lease and start trying to evict you after five.”

In one of the lawsuits filed against her, Croman claimed that she owed $33,000 in late fees. The company refused to settle and lost the case when it presented no evidence in court, Godfrey says, but she had to spend $25,000 on lawyers. In total, she spent $80,000 in three years defending herself against Croman lawsuits. “He destroyed me,” she says.

GOLES is planning to bring a case against Croman to the state Tenant Protection Unit.