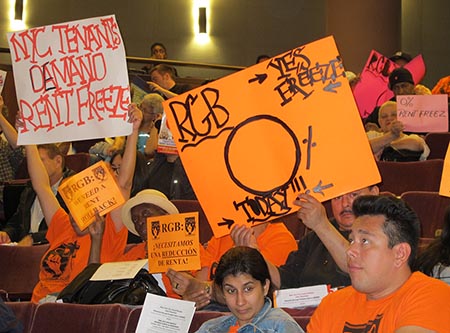 The Rent Guidelines Board on May 5 simultaneously raised and dampened tenants’ hopes that it would freeze rents this year, when it made its preliminary recommendations for rent adjustments for rent-stabilized tenants whose leases come up for renewal in the year beginning October 1.

Once again, the board adopted a range of possible rent adjustments instead of an actual number, settling on a range of zero to 3 percent for a one-year lease renewal and 0.5 to 4.5 percent for two years.

This seemed to be a signal that the board might ultimately vote to freeze rents for one year, but not two, especially as the motion was made by new chair Rachel Godsil. Five of the nine members, including three of the five public members, have been newly appointed by new Mayor Bill de Blasio, who last year advocated strongly for a rent freeze—when he was in campaign mode. The final vote is scheduled for June 23.

The vote was 8-1, with tenant members Harvey Epstein and Sheila Garcia supporting it, as well as all five of the public members, including the chair. New landlord member Sara Williams Willard also voted yes, while holdover landlord member Magda Cruz was the only dissenter.

“We’re in an information-gathering phase,” said Godsil, when Epstein asked her to justify the range. Landlords’ operating income is up, but so are their costs, she added, and a freeze might be a possibility too. In fact, the board has seen recent data showing that landlords’ net operating incomes went up again for the eighth year in a row and now averages 39.5 percent, meaning the typical owner of rent-stabilized housing spends roughly 60 percent of their income running their building, leaving almost 40 cents of every dollar for debt service and profit. 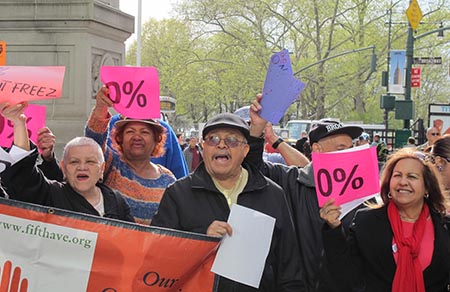 Godsil delayed the start of the meeting from 6 to 7 p.m. because security at the U.S. Customs House in lower Manhattan was so absurd that it took an hour and a half for everyone to get into the building and find seats in the auditorium. Surrounded by gun- and taser-toting Homeland Security agents in bulletproof vests, the attendees were admitted to the building five or six at a time. Godsil apologized to the audience for the problem and stated that they will look for venues with more reasonable security in the future.

Once it began, the meeting was over in an hour.

The two tenant members did a terrific job of advocating for our position. The two landlord members seemed subdued. As usual, no public member joined in any debate, other than the chair. Tenants in the audience vastly outnumbered landlords, and the tenants were appropriately vocal, chanting “Roll back rents” and “Open your books, you dirty crooks.” When Cruz made her motion for sky-high rent increases, a woman yelled out, “That woman needs a psychiatrist! She has lost all touch with reality.”

Outside on the plaza before the meeting, while people were lined up waiting for admittance, who should appear but Bloomberg’s last RGB chair, Jonathan Kimmel? For the next 45 minutes, he stood talking with Frank Ricci and other staff from the Rent Stabilization Association. True to form: Kimmel in the landlord’s corner, where we would expect to find him.