The evening news on March 22 should have been a celebratory affair, according to Mayor Bill de Blasio. The City Council had passed what he called the most progressive affordable-housing requirements in the country. But footage of the vote also included four protesters with their hands super-glued together being dragged out by security guards. Their message was that Mandatory Inclusionary Housing is not an affordable-housing plan, but a gentrification plan.

Earlier that morning, Met Council joined dozens of organizations on the steps of City Hall to demand a no vote from the Council. Estevan Nembhard of Northern Manhattan is Not for Sale emceed the rally. “Don’t believe what you read. The support is not unanimous. There is an alternative. It’s called community planning, not city planning” he said to applause. “You know what we call MIH uptown? Missing In Harlem, cause that’s what we’ll be if this plan goes through,” said Marina Ortiz of East Harlem Preservation.

Over 40 tenant and people power organizations penned a letter calling on the Council to reject the Mayor’s plan and look for real solutions to the housing crisis [see page 7]. While the Council amended the plan to mandate more housing for people at slightly lower incomes, it will not produce affordable housing for the 30 percent of New Yorkers who earn less than $25,000 a year: single mothers, fast-food workers, home health aides, and seniors on fixed incomes. In addition, building new housing that is 70 to 75 percent market-rate housing in low-income communities of color will only fuel gentrification, as it gives landlords an incentive to raise rents. Because they can exploit major capital improvements, individual apartment improvements, vacancy bonuses, and vacancy decontrol to raise rents, neighborhoods will likely lose more affordable units than can be built under the mayor’s plan.

After the protesters were forced out, the Council passed the MIH plan by a 42-5 vote. Councilmembers Inez Barron, Jumaane Williams, Joe Borelli, Steve Matteo, and Barry Grodenchik voted against it. “Working families, seniors, and low-income New Yorkers are depending on us to pass a plan that includes a mandatory minimum amount of affordable homes in each option,” Williams said in a statement a few days earlier. “The plan, as it stands today, can allow entire neighborhoods to be rezoned without including any low-income housing. That was, and still is, a nonstarter for me.”

MIH is a new zoning tool that will work with the 15 rezonings the administration seeks in low- and middle-income communities, with East New York, Flushing, the southwest Bronx, East Harlem, and Inwood where it hopes to start. The city will rezone dozens of blocks to transform them from manufacturing or low-rise residential use to higher-rise residential, and require developers to set aside 25 to 30 percent of the apartments they build as “affordable housing.” According to the administration, this will help solve the housing crisis by expanding the supply of apartments. It is expected to yield 12,000 of the 80,000 “affordable” units de Blasio has promised to create.

The fight over the past few months has been largely over the definition of “affordable.” The administration’s original plan would have given developers three options aimed at households making between $51,800 and $103,560 for a family of four. Housing advocates argued that the new housing should be affordable to New Yorkers making $25,000 and below, 30 percent of the metropolitan area median income (AMI). 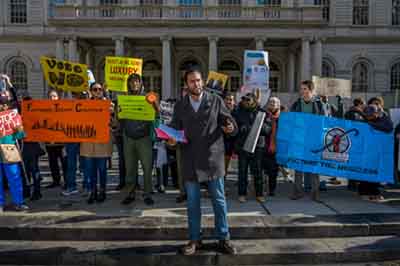 It also added a “deeper affordability” option, where developers can choose to build 20 percent of the units for people at 40 percent of AMI. Unlike Options 1 and 2, the city can’t require this.

Developers who choose to put their MIH affordable units at a different site will have to make another 5 percent of the units affordable housing, and will not be able to construct buildings taller than previously allowed. The administration has also promised to support a bill sponsored by Councilmember Brad Lander, which will require some landlords and property owners to get a certificate proving that they did not harass tenants before they can receive a permit to demolish or alter a residential building.

The de Blasio administration also reached a deal with the Real Affordability for All Coalition (of which Met Council is a member), to conduct a study on creating a new density-bonus tool that would leverage more and deeper affordability as well as union jobs from the neighborhood rezonings. RAFA is fighting to see that in all rezoned neighborhoods, half of all new housing built will be affordable to families that earn the median income of that community or less. The study is planned to take place from April to July.

One obstacle to developers building under MIH is the end of the 421a program, which gave new residential construction tax abatements of up to 35 years. It expired last winter when the Real Estate Board of New York refused to reach a deal with the building trades to use union labor on developments receiving the subsidy. Under 421a, developers in much of the city were also required to set aside a percent of affordable units and register all apartments as rent-regulated. However, landlords frequently ignore these requirements.

Without these tax breaks, MIH may not have much of an effect, because developers just won’t build. “Mandatory inclusionary housing is empty legislation without 421a,” real-estate attorney Alvin Schein told The Real Deal.

The fight will now become much more local. People living in the neighborhoods facing rezoning will continue to demand housing they can actually afford. Each rezoning proposal will have to go through the Uniform Land Use Review Process, in which the city solicits neighborhood comments and the local community board votes a recommendation. The City Council will then vote on the proposal, and it’s customary—but not mandatory—for them to defer to the member representing the area. If the mayor vetoes their decision, a two-thirds majority is needed to override.

Until the loopholes in the rent-stabilization laws are closed, building expensive new housing in lower-income neighborhoods is a recipe for gentrification. Once other landlords in the area see that people are willing to pay luxury-level rents, they will try to get the same money from vacant apartments—or apartments where they persuade the tenants to leave.

If Mayor de Blasio seriously wants to preserve affordable housing, he should make repealing vacancy decontrol and strengthening the rent laws a bigger priority on his Albany agenda than reviving 421a.