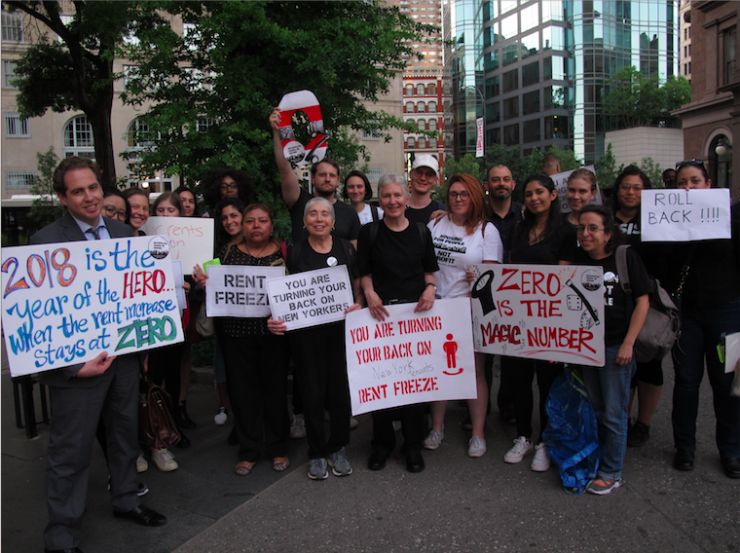 In a vote almost as predictable as the Supreme Court’s decision the next day in Janus v. AFSCME Council 31, the city Rent Guidelines Board voted June 27 to allow rent increases of 1.5 percent for a one-year lease renewal and 2.5 percent for two years.

The increases, proposed by RGB chair Kathleen Roberts and approved by a 5-4 vote without any public discussion, will be the highest allowed for one-year leases since Mayor Bill de Blasio took office in 2014. The landlord representatives had asked for 2 percent and 4 percent. The only thing that departed from the Bloomberg-era pattern was that public member Rodrigo Camarena joined the two tenant representatives in backing a rent freeze, so owner representative Scott Walsh had to provide the fifth vote for the increases.

“It’s really sad that this administration is pushing its representatives on this board to increase landlords’ profits,” Met Council executive director Ava Farkas told the organization’s contingent after the vote. “It shows whose interest this increase is in.”

The board did vote 7-2 to freeze rents on single-room occupancy hotels and rooming houses.

New tenant representative Leah Goodridge proposed a one-year freeze, with 2 percent increases on two-year leases. She noted that 262 tenants and only 12 landlords had testified at the RGB’s five public hearings, and that the board’s 2018 Income & Expense Study had found that in 2016, during the two-year rent freeze on one-year leases, owners’ net operating income before taxes and mortgage payments averaged $312,000 per building, up $16,000 from before the freeze.

“My vote is for Joy Noel, the 85-year-old woman from Brooklyn who was evicted for her rent-stabilized apartment and died homeless,” she said.

The only public member that argument moved was Camarena, who said he voted for the freeze to prevent tenants from being displaced. The more than 500 protesters who filled most of the hall turned their backs after the 6-3 vote against the proposal, chanting “Shame on you.”

Gladys Puglia, 55, a Make the Road New York volunteer from Bushwick, knows what he was talking about. Two of her three daughters, both in their early twenties, live with her in a three-bedroom apartment. The rent is about $1,325 a month, and she hasn’t gotten a raise at her clerical job in 14 years, she said. Meanwhile, renovated apartments in the building are going for $2,800 to $3,000.

“Two weeks ago I was almost homeless,” she says. She’d fallen behind in the rent, but got a “one-shot deal” in which the city’s public-assistance agency covered her arrears to prevent the family from being evicted. “Now what I have to do is rent one of my kids’ rooms so I can pay my full rent.” 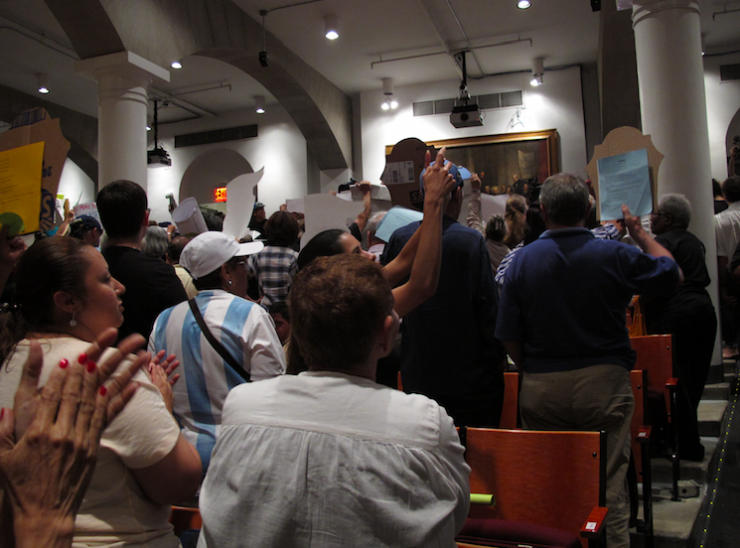 Kara Lynch, wearing a black “Brooklyn No Se Vende” (Brooklyn Is Not for Sale) T-shirt she’d customized with white tape to add “Ni El Bronx” (Neither Is the Bronx), says this year’s increases won’t make much of a difference to her—because the $1,300 preferential rent she pays for a four-room apartment in Highbridge would have to more than double to reach her supposed legal rent, now $3,300 after a major-capital-improvement increase. An artist and college professor, she moved to the Bronx in November 2016, displaced from Greenpoint after eight years there.

“It gives the landlords more confidence about displacing people,” she says

“The fight is not over,” Rolando Guzman of the St. Nicks Alliance told people outside afterwards. “We have to defend our neighborhoods against predatory landlords.” And next year, he added, the battle will be in Albany, trying to get the rent laws strengthened