Tenants in two Chinatown buildings may be on the verge of a victory in their struggle to avoid mass eviction. 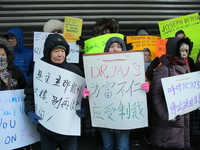 On December 20, the state Division of Housing and Community Renewal recommended to State Supreme Court Judge Kathryn Freed that she declare 83 and 85 Bowery rent-stabilized, which would block the main way that landlord Joseph Betesh has sought to evict tenants of all 28 apartments at the two buildings.

“I want to report very good news,” tenant leader Shu Qing Wang said at a rally outside the two buildings on December 28, speaking in Chinese with an interpreter to about fifty people heavily bundled up against the 20-degree cold. She said the DHCR report shows “the landlord has been lying.”

She added, “We demand that the landlord honor the rent stabilization and repair the building.”

The DHCR rejected Betesh’s two arguments in defense of his eviction attempts: that the buildings were not rent-stabilized because they had been lodging houses, not apartments, when the state rent-stabilization law was updated in 1974; and that the renovations done when they were converted to apartments in 1981 were substantial enough to qualify the structure as a new building.

The department’s report said that while the buildings had been lodging houses in 1974, they were “still housing accommodations,” and further cited a 1982 state court ruling that held it was “obvious” that the state legislature intended a 1981 amendment extending rent stabilization to single-room-occupancy dwellings to be retroactive. As for renovations, said the DHCR, to remove the building from rent stabilization the old owner would have had to replace 75 percent of building-wide systems such as plumbing, heating, and gas supply when it did the conversion — and Betesh had failed to prove that any actually had been replaced, “with the possible exception” of new bathrooms being constructed to replace the old common ones.

“Nobody thinks a lodging house is commercial, and DHCR saw right through it,” says Seth Miller, the lawyer representing tenants in 23 of the apartments.

The several dozen tenants are not out of danger yet, says Miller. First, the DHCR’s recommendations are not binding on Judge Freed; she can “accept, reject, or modify” them. Second, the landlord is still claiming that the building is structurally unsound.

The two sides discussed those issues with her at a conference Jan. 5, along with representatives from the city’s Department of Housing Preservation and Development, Fire Department, and Department of Buildings.

“The landlord is insisting that making structural repairs requires the tenants to vacate,” Miller said before that meeting. “Hopefully, we’ll have three agencies tell the judge that’s bonkers.”

Betesh’s lawyer, Joseph Goldsmith, did not respond to phone and email messages.

Judge Freed “appears to want the buildings repaired,” says Miller, so the tenants want her to focus on the most important problems, such as a listing staircase at 85 Bowery, which HPD declared a Class C (“immediately hazardous”) violation in November 2015. HPD has the power to do the needed repairs itself if the landlord fails to do them on time.

Betesh, who owns the Dr. Jay’s clothing store chain, acquired the two buildings in 2013, paying $62 million for eleven properties along the Bowery. He soon began trying to evict tenants. Betesh filed the mass-eviction lawsuit in March 2016, shortly after a Housing Court judge, responding to actions filed by both the tenants and HPD, ordered him to complete needed repairs in the two buildings, including the staircase, by the end of that April.

The tenants are mostly restaurant and garment-factory workers, tenant association representative Jinming Cao told the Voice in July, and they generally pay $1,000 to $1,200 a month rent. Few speak English. They now want the repa irs done and compensation for the losses they’ve suffered over the last two years, Zishun Ning of the Chinese Staff and Workers’ Association told the December 28 rally. He called the DHCR report “a victory for the whole community of Chinatown and the Lower East Side.”

Other lower-income neighborhood residents are “facing the same displacement and the same harassment,” former City Council candidate Christopher Marte told the Voice after the rally.

“We’re all facing the same issue, so we come together,” says Cao. The tenants are still urging people to boycott Dr. Jay’s, he adds.

A version of this article previously appeared on VillageVoice.com.