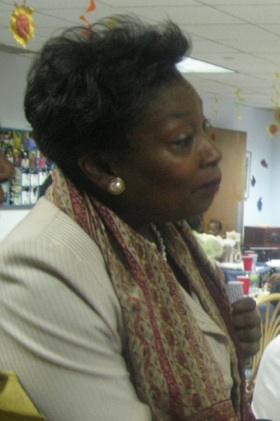 Andrea Stewart-Cousins was elected leader of the New York State Senate Democratic Conference in December. She is the first woman leader in the Legislature. She was elected to the Senate in 2006, defeating entrenched Republican incumbent Nick Spano. She represents the 35th District in Westchester County, which includes most of Yonkers, Scarsdale and river towns such as Hastings-on-Hudson and Tarrytown, and parts of New Rochelle and White Plains. Met Council board member Michael McKee interviewed her for Tenant/Inquilino in her Yonkers district office on Feb. 1.

Tenant/Inquilino: Does Cecilia Tkaczyk’s victory make a difference in the balance of power in the Senate, given that Senator Jeff Klein’s Independent Democratic Conference has joined with the Republican minority to share power?

Andrea Stewart-Cousins: CeCe’s election further amplifies what we already know. New Yorkers are looking to have a Democratic majority, and a progressive legislative session. She has a lot of knowledge and experience, especially in housing, she has a level head, and she’s a strong personality.

CeCe’s election sends the right message. Especially when you look at all the Republicans did to ensure their power. Not only did they renege on their promise to have a nonpartisan redistricting process, but then they added an additional seat, the seat that Senator Tkaczyk is now occupying. They crafted this district for a Republican Assemblyman. In fact, they were calling it his seat from the outset.

In 1997, when you were a Westchester County legislator and then Senate Majority Leader Joe Bruno said he would not renew the rent laws when they expired, you organized five town hall meetings in Yonkers and helped fill buses to Albany. What effect did that campaign have on you?

That campaign demonstrated beyond the shadow of a doubt the power of the grass roots, the power of people who stood up and said no. The late Adam Clayton Powell said that power is in our hands, and the power is our votes.

When you first ran for State Senate in 2004, people told me, “There is no way an African-American candidate can win in that district, and Nick Spano is an institution.” You lost by 18 votes, and then in 2006 you won by more than 2,000 votes. Why do you think you were able to carry a district that is not majority African-American?

I served ten years in the County Legislature, and authored human-rights legislation, I was at the forefront of living-wage legislation, smoke-free workplace legislation, and even tough gun laws. My constituents came to know me and know that I was going to work hard for them, and for the right reasons. It was about really wanting to change what has been described as a broken system in Albany, one that held the educational prospects for our children hostage, one that would say that we’re not going to renew your rent laws. I believe that the people who worked so hard on my election believed that I could help change those things.

Many tenants volunteered in both your 2004 and 2006 races. Do you think tenants have the potential to turn the tide in close races?

Oh, absolutely. I meet people today who remind me that they made phone calls for me with Tenants PAC. Tenants made thousands of phone calls, did door knocking, whatever was needed to get votes.

There were overt attempts by your opposition to intimidate black voters. That was only six years ago. Have things improved?

Voter suppression is unfortunately still being used as a tool to steal elections. We were able to pass two pieces of legislation in Albany that dealt with two of the issues that came up in my election. I sponsored a bill that says that you cannot disqualify an absentee ballot because the person forgot to use an initial. It used to be that if you sent in an absentee ballot at the age of 55 and you didn’t sign your name exactly as you had when you registered to vote at 18, they were able to discard your vote. For example, I registered as Andrea Stewart, and if I sent in an absentee ballot as Andrea Stewart-Cousins, my full married name, which I have had for more than 30 years, they would have had the right to throw away that ballot. That doesn’t happen anymore.

Also, we required proper street finders at each polling place. Part of why I lost in 2004 was that people were sent to the wrong polling places by election workers, and then found that they were not in the book because they were at the wrong site, so they cast affidavit ballots. The courts would not let those ballots be counted. Voter suppression is not a crime in New York. It should be.

Since vacancy destabilization was incorporated into state law in 1997, the New York metropolitan area has lost at least 300,000 rent-stabilized apartments. Westchester has lost more than half its rent-stabilized units since the 1970s. How has deregulation affected your district?

If I were to ask my staff what the bulk of calls we get are about, the answer would be overwhelmingly housing. People are finding it harder and harder to find a place they can live that is suitable and affordable, or to afford the rent where they are living. My push has been not only to keep the affordable housing stock that we have, but that we have to have a conversation about creating new affordable housing.

[MacNeil] Mitchell and [Alfred] Lama were state legislators. More than 50 years ago, they were able to create an economic structure to produce affordable housing. I cannot believe that they were more innovative and inventive than we are.

Governor Cuomo’s proposal is for a billion dollars to build or preserve 14,000 units. But we are losing far more than 14,000 units every year due to vacancy deregulation. Unfortunately, the governor has never said whether he supports your bill to repeal vacancy destabilization.

We are losing so many rent-regulated apartments. And you know how long I have carried the bill to repeal vacancy decontrol, since I first came to the Senate in 2007. We cannot possibly sustain the economy without having places for people to live. People are paying $3,000 for a one-bedroom apartment. It’s why we need rent control. I will continue to push for repeal of vacancy deregulation. My constituents understand the importance of this issue, so we are going to keep pushing the governor and the Senate Republicans.

Do you think we can get a strong campaign-finance reform bill through this year, with public financing of elections? Public financing seems anathema to the Senate Republicans.

We were happy that the governor highlighted this issue in his State of the State address. We have a letter that says, “We’re supporting you, Governor, we want this to happen” that is signed by 26 of the 27 members of our conference, and I am working to get all 27. I understand that the Independent Democratic Conference thinks this is a great idea, so I don’t see why we would not be able to get it done. If there are 32 votes for this, we should be able to get it to the floor.

As we have seen on the national level, we have unknown sources pouring untold dollars into local campaigns, creating havoc with our democratic system. This outfit in Virginia [a far-right group called Common Sense Principles] spent a million dollars in New York against our candidates. Instead of reporting this as campaign expenditures to the Board of Elections, they reported this as lobbying expenses to the Joint Commission on Public Ethics. They’re lobbyists? I guess they were lobbying the people of the district.

In my re-election race two years ago, the same Virginia company sent anonymous mailers claiming that I was missing in action. But the picture that was supposed to be me had white, male legs. So they must have thought I was some man named Stewart Cousins. It was outrageous.

With 33 Democrats in the Senate, do you think there is any hope of bringing the IDC back to the fold and achieving a real Democratic majority?

I have ongoing discussions with Senator Klein. We have worked well with IDC members, we have worked on a number of bills with them. I am certainly hoping that we will all be able to take our rightful place of leadership.

How do you view your chances of taking the majority in 2014?

Well, we took the majority this time! Demographics being what they are, it is a matter of time. The Republicans will continue to use whatever tactics they can to hold on to power, but the writing is on the wall. I am confident that we will take the majority in the next cycle. We might even be able to do it before the next election.