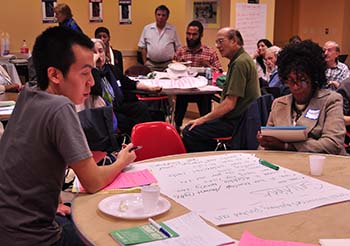 Over 55 tenants from around the city gathered Oct. 15 at the headquarters of the District Council 37 city workers’ union for an energetic meeting of Met Council—the first since the end of the intense activity of last spring’s campaigns to renew the state’s rent regulation laws and win a rent freeze from the city Rent Guidelines Board. Executive Director Ava Farkas and board chair Kenny Schaeffer put a call out to members to step up their involvement in the organization.

“We won a historic rent freeze at the RGB, but that still means that rents are frozen at their current, unaffordable levels. In Albany, we did not win much change to the rent laws. That means we have to redouble and intensify our efforts on the ground to build more tenant power,” said Schaeffer.

“We view organizing as the most effective means of addressing problems of housing in our city, which are systemic in nature,” explained Farkas. “We are a small staff running a city-wide organization. We cannot do this alone. The membership of Met Council needs to do this with us, whether it’s organizing in your building or in the larger community.”

Mary Crosby, a volunteer who spent hours on the phone inviting members to the meeting, touched on the urgency of the problem. “We have a housing crisis where tens of thousands of New Yorkers are being put through the housing wringer,” she told the group. “There’s a lot of pain out there. However, pain is not necessarily a bad thing, it can be very motivating. I, myself, didn’t know much about the housing movement prior to my own housing nightmare. Now many New Yorkers are seeking answers to housing questions and want to make things better.” 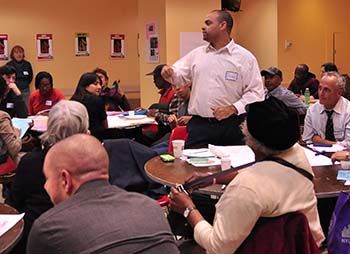 In small groups people discussed the biggest problems facing tenants and possible solutions. The problems they listed included the “tyranny” of rent increases for major capital improvements; small businesses getting pushed out; market-rate tenants having almost no rights; evictions; and poor services for long-term tenants. Solutions they suggested included extending rent regulation to all apartments; getting money out of politics; ending the preferential-rent scam and MCIs; building new housing for the poor and working class instead of luxury high-rises; and giving community boards veto power over land-use decisions.

There was common agreement that the only way to actually win any of these demands would be through building a broader movement that includes students, people of faith, labor unions, and any tenant, regardless of the type of housing they live in.

The meeting ended in a chant of “Fight, fight, fight, housing is a right” and an enthusiastic response to the proposal for Met Council to hold more frequent city-wide meetings. Members also filled out surveys indicating how they would like to get involved in the organization, including volunteering for the hotline, joining a Housing Court support committee, and writing for

“I thought it was very empowering to hear everyone’s passion, no matter what borough or living situation,” said Angela Pham, a new hotline volunteer. “Everyone felt the same level of enthusiasm to make things change. It’s good to know you’re not alone in dealing with the crisis that is housing in New York City.”

If you want to become a more active member and volunteer with Met Council on a regular basis, please email ava@metcouncilonhousing.org