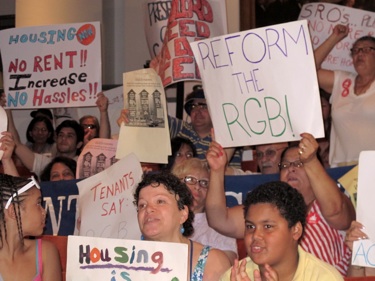 “Mic check” came the call from the back of the hall, coupled with chants of “Rent Freeze,” “The Rent Is Too Damn High,” and “Que queremos? Cero porciento.” As chair Jonathan Kimmel opened the Rent Guidelines Board’s June 21 meeting by intoning the legal boilerplate of the rent-stabilization law, the protesters were calling out and repeating facts and statistics about tenant life in New York City. “The average income of rent-stabilized tenants is only $37,000.” They carried signs in English, Spanish, Chinese, and Bengali.

The vote was 5-4, with the public members all in favor, the landlord representatives voting no because it wasn’t high enough (after they saw it was going to pass), and the tenant representatives opposing it as too much, especially the poor tax.

The increases, which will apply to leases renewed in the year beginning Oct. 1, were the smallest the board has permitted since 2002, but tenants in the crowd were bitterly dissatisfied. “It’s still unfair,” said Belayet Hossain, a Bengali immigrant who pays $1,750 a month for his Jackson Heights apartment. If he takes a two-year lease, his rent will go up by $70.

“It should have been zero,” said Barry Soltz, a tenant leader from the Pelham Parkway section of the Bronx. “We’re in a recession. Families are hurting.” He called the minimum increases “outrageous.” 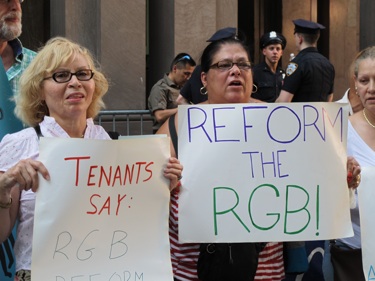 RGB members acknowledged the city’s housing crisis. Landlord representative Steven Schleider sounded like he’d been reading tenant-movement flyers when he said we have to replace “rent-stabilized housing lost to deregulation.” The audience drowned out most of what he said, but as in the past, he praised the Bloomberg administration’s program of constructing some so-called “affordable” housing, and advocated expanding subsidies for low-income tenants along the lines of the SCRIE program. He accused politicians who called for a rent freeze of pandering.

Tenant representative Adriene Holder then proposed a rent freeze, “in the interest of fundamental fairness.” More than half of rent-stabilized tenants now pay more than 35 percent of their income on rent, she argued, the highest amount in the history of the city’s Housing and Vacancy Survey. Rents have risen by 25 percent in the last six years, she added, and 84 percent of poor people now spend more than half their income on rent, up from 66 percent.

As usual, the board rejected that, 7-2. After a few minutes of off-mike discussion, they returned to adopt Kimmel’s proposal for increases.

Many tenants, tired of this predictable annual ritual, are urging that the RGB be reformed. “We know the public members are in cahoots with the real-estate industry,” Barry Soltz told a brief rally before the meeting. Wasim Lone of Good Old Lower East Side called it a “rubber stamp” and the “Rent Gouging Board.” We need a board that pays attention to working people’s needs, he added.

The Assembly passed legislation this year to let RGB members be chosen from people with a broader set of qualifications and to require City Council confirmation of mayoral appointees, but the state Senate refused to vote on it.

Public member Ronald Scheinberg criticized City Council Speaker Christine Quinn for speaking out for a rent freeze. “If she doesn’t like the way this board works, she should work to change the law,” he said.

The City Council actually has no power to strengthen the rent laws or to regulate RGB proceedings, because the 1971 Urstadt law restricts that power to the state. One could also argue that Quinn, who’s become more outspokenly pro-tenant as she prepares her campaign in next year’s mayoral election, could have ensured a more pro-tenant RGB in 2009—if she had opposed the bill that allowed a third term for Mayor Michael Bloomberg, instead of leading the effort to get the Council to pass it.