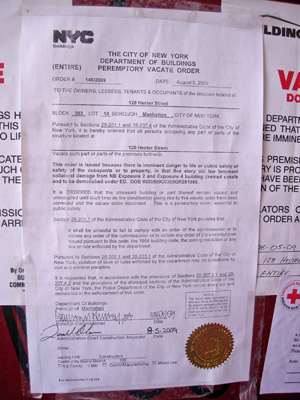 Three years after they were permanently displaced from their homes, the 30 former tenants of 128 Hester St. in Chinatown are still waiting for compensation.

The building is one of several in Chinatown where owners have forced out longtime tenants by asking the city to issue a vacate order. A six-story tenement with 10 rent-regulated apartments and one storefront, 128 Hester was demolished in 2009, after it was damaged during construction of the Wyndham Garden Chinatown Hotel next door, and the city Department of Buildings issued a vacate order. Its site is now a vacant lot used to store materials for the hotel’s construction.

Many of the tenants are still living with relatives, and most of them are outside Chinatown, according to Asian Americans For Equality (AAFE), a community-based organization that has been working closely with them since the vacate order. Half of the residents are over 62 years old and had rarely set foot outside Chinatown before they were forced out.

The building was next door to the Music Palace at 91-93 Bowery, the last Chinese-language movie theater in Chinatown. But around 2006, a group of investors led by William Su purchased 91-93 Bowery. They demolished the historic theater in order to build a luxury hotel, the Wyndham Garden.

Su and his investors also purchased the adjacent 128 Hester St., but commenced construction of the hotel without taking any precautions to maintain the building’s structural stability.  On July 9, 2009, a Department of Buildings engineer cited multiple hazardous violations for “Failure to Maintain” that were “uncured by the owner.” The report also stated that DOB has been monitoring and intervening for the building’s safety since 2007, but the owner “still had not executed the stabilization work.”

AAFE later learned that in August 2009, Su begged the DOB to issue a vacate order forcing out the tenants of 128 Hester, on the grounds that the building had sustained irreparable structural damage and was unfit for habitation. The DOB reluctantly issued that order on Aug. 5, 2009, and, shortly thereafter, ordered the building demolished. The result was that a small local business and the 30 residents, all rent-regulated tenants who had lived in Chinatown for at least 20 years, were rendered homeless. 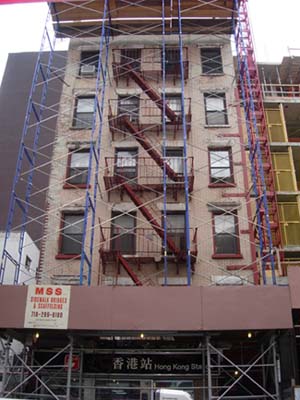 “I still remember the day when it happened,” said a 76-year-old woman who had lived at 128 Hester St. for over 30 years, “I didn’t know what was going on, but everyone was telling me I cannot stay in the building anymore. I have nowhere to go and I have a surgery the next day.” With limited time and opportunity to retrieve their possessions and a lack of space to store them, many tenants were forced to give up most of their belongings. They could only retrieve essential items like important personal documents, medication, and some clothing.

Shortly afterwards, Su’s attorney filed a request with the state Division of Housing & Community Renewal (DHCR) to grant a certificate of eviction that would permanently terminate the tenants’ rent-regulated status. With the help of experienced tenant attorney John D. Gorman, AAFE Housing & Community Services and the tenants filed a response seeking a stipend for relocation and compensation for moving expenses.  On May 26, 2010, DHCR issued an order requiring Su and his co-owners to pay relocation fees for the tenants. However, they have yet to comply.

In July, Su told the Chinese-language newspaper Sing Tao Daily that he was willing to compensate the tenants, but that the amount AAFE claimed was far more than what the owners expected to offer.  On the other hand, AAFE responds, it was the DHCR that determined the amount of the payment, based on its own stipend/relocation requirements. The agency’s Operational Bulletin for 2009 sets the stipend at the difference between the monthly rent the tenant is paying for their new apartment and the amount listed in its “demolition stipend chart” for an apartment of similar size, with a three-room minimum. The owner has to pay that difference for six years.

In a effort to seek justice for the tenants of 128 Hester St., AAFE has launched a campaign urging Wyndham Worldwide and William Su and his investors to provide  fair compensation for them.

Kayan Chiu is a housing counselor at Asian Americans for Equality. AAFE asks that interested community members sign the petition at www.justiceforchinatown.org and not patronize any Wyndham hotel until justice is served for the tenants. If you have any questions about the petition and/or regarding 128 Hester Street, please contact AAFE Housing & Community Services at AskAAFE@aafe.org or (212) 979-8988.