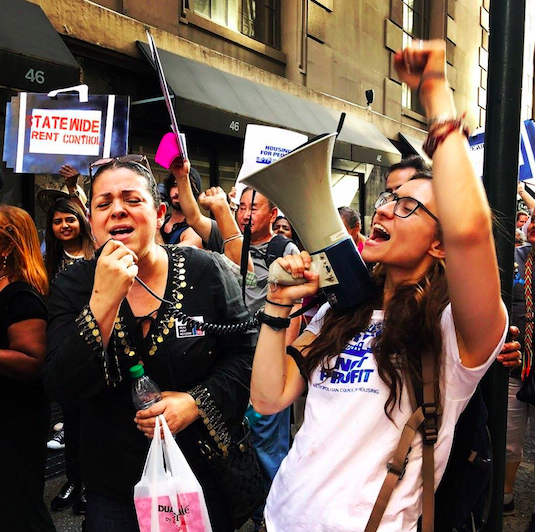 Demanding that New York State strengthen its laws protecting renters, about 1,000 tenants from all over the state marched June 14 from the New York Public Library to an Upper East Side event venue where Gov. Andrew Cuomo was receiving an award.

“We are standing up and fighting back because New York has a housing crisis,” Cynthia Nixon, who is running against Cuomo in the Democratic primary, told the crowd. “Rents are skyrocketing and wages have not kept up with rents.”

“Housing is a human right,” added Palestinian-American activist Linda Sarsour. “It is not a luxury to have a roof over your head. Cuomo needs to put people before profit, before developers, and before campaign contributions.”

The governor was invited to speak, but declined.

The Housing Justice for All Alliance, which organized the march, is demanding that the state government allow rent stabilization statewide, instead of just in New York City and Nassau, Westchester, and Rockland counties. It also wants vacancy destabilization and the 20 percent vacancy bonus repealed, landlords prohibited from raising discounted “preferential rents” as long as the tenant receiving them stays in the apartment, and tighter restrictions on rent increases for major capital improvements and individual apartment improvements.

Tenant groups from Albany, Rochester, and Akron, a small town east of Buffalo, came down for the march. In Akron, developers are now buying up trailer-park lots for $2 to $3 million, and there are no limits on annual rent increases, said Lori Reiner of the Akron Mobile Home Association. Most of the 118 trailer-park renters there are on fixed incomes. They are petitioning for a law that would prohibit evictions for five years.

Mary Brown of the Rochester Citywide Tenants Union told of her building’s rent strike against slumlord Peter Hungerford, demanding that he fix collapsed ceilings and get rid of mold, vermin, and rodents. Almost all the 48 residents participated, and as a result, the city is taking the landlord to court, and an administrator is managing the building. 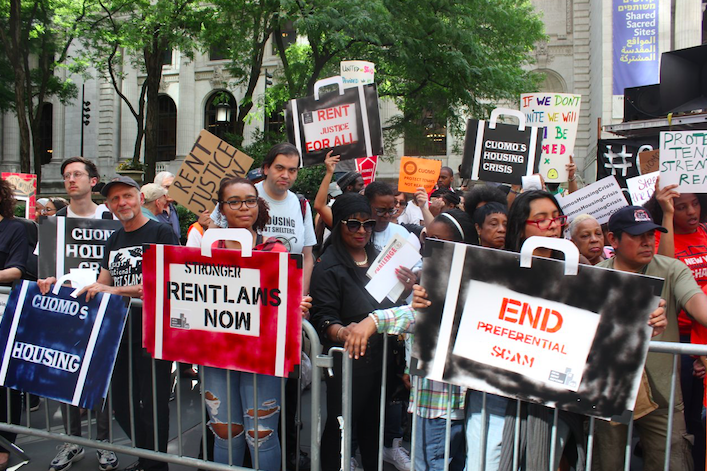 A woman from the Rochester Homeless Union spoke about tenants of the Cadillac Hotel had held a sit-in at Cuomo’s office to demand rent stabilization and protection against evictions without “just cause.” The longtime single-room-occupancy hotel downtown was bought by a luxury-housing developer last year, and the about 35 tenants were forced out, the last when the hotel was locked in early June.

The governor was in the city to receive the inaugural “Master Builder” award from the Building Trades Employers Association (BTEA), a trade group of construction contractors. BTEA President Lou Colletti told The Real Deal that the award was created especially for Cuomo and was inspired by Robert Moses, citing the governor’s multibillion-dollar projects like the new Tappan Zee Bridge, the renovation of LaGuardia Airport, and Moynihan Station. The BTEA has increasingly embraced the use of nonunion labor, as developers try to break the building-trades unions’ hold on large-scale projects. Last year, Colletti threatened to sue if the city enacted a law requiring government-subsidized training for construction workers.

When Cuomo left the building, he was ushered into a waiting limousine, guarded by a phalanx of police officers. He did not glance at the protesters, who had been chanting, “Cuomo, Cuomo, can’t you see, high rent is displacing me.”