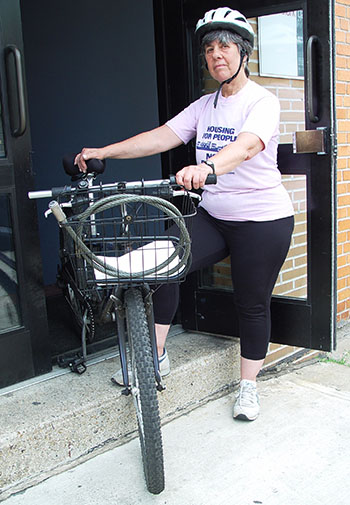 A “bedrock” activist is what Jenny Laurie, former Met Council executive director, calls her. She describes Ella as one of “a small core of dedicated people who appeared when help was needed, whether administering the organization or staffing a phone bank before an important hearing.” Former Met Council Board Chair Scott Sommer says, “Ella was very dedicated and committed to the people and issues she held dear, whether they were political [or] personal.”

Ella came by her activism naturally. Her parents, Judith and Ben Levine, were Communists, her mother an actor, her father a cultural critic for the Daily Worker until his death in 1980. But growing up in Brooklyn in the politically inert 1950s, Ella wasn’t an activist in her youth. At 20, she met and married Bill Matthews, a North Carolina factory worker transplanted to New York, and settled into life as a Brooklyn housewife and mother. Their first child, Ann, was born in 1957. (We met in an East Flatbush playground in 1960 and remained close for the rest of her life.)

The Vietnam War drew Ella into activism. She protested the war in New York and Washington (often with me). During the same stretch of time, Bill Matthews gave up factory work, and he and Ella opened a bicycle store in Brooklyn—and Ella became a confirmed bike rider. In between babies (Eileen in ’62, Rachel in ’67), Ella went back to school and learned computer programming.

Ella’s and Bill’s marriage broke up (although they never divorced and remained in touch, and she spoke at his funeral in 2007), and the bike store went under, but Ella never gave up riding bikes. She went to work as a programmer and then a program analyst for banks, Con Edison, and a publishing firm. Sometime around the late ’70s, she joined Met Council.

It became her political home. She volunteered at two Met Council branches, becoming, in Scott Sommer’s words, “a mainstay of [the] branches in Flatbush and Park Slope during very critical times for those communities.” He adds, “Her dedication no doubt helped many families keep their homes and showed people that through organizing and activism one could make a difference.” She came to volunteer in the Met Council office, answering the hotline phone and working with Tenant. Eventually she was elected to the Met Council board. And, says Jenny Laurie, “She helped (with a volunteer database designer she recruited for us) convert Met Council’s membership system from a mechanical one to a computerized database (which took endless hours, days, weeks, months of work).”

By that time, she had also become an intrepid traveler. With her parents, her daughters, and friends (including most often her fellow peace activist, the late Phyllis Salome, and me), she traveled across Europe and to China, Nicaragua, Cuba, and Buenos Aires. As often as possible, she visited Paris, the city she loved most.

In the mid-1990s, she went to work at New York State’s Metropolitan Transportation Council. It would be her last job change, and a fateful one.

The agency had its offices on the 82nd floor of One World Trade Center. Ella was working there on the morning of September 11, 2001, when the hijacked American Airlines Flight 11 crashed into the building between the 94th and 98th floors. In the massive confusion that followed, Ella walked down 82 flights of stairs and survived. Many of her colleagues remained in the office and didn’t.

Jenny Laurie describes Ella’s account of that day as an example of her “Irish/Jewish/New Yorker way of telling a story.” Ella, she says, “left her office with a coworker, who was quite out of shape [and who] complained the entire way down about being tired and needing to stop to rest. Ella, for whom abandoning the woman was unthinkable, credited the woman with saving her life, when, fairly close to the ground floor, the woman sat down on a step and refused to move. If not for that stop, she and Ella would have been walking out onto the plaza just as the other tower fell and they would have been killed. Ella’s story was typical, deflecting any idea that she was the hero by insisting that her life was saved by someone she had been wishing she could leave behind.” For the next several years, Ella would speak at commemorative rallies as one of the survivors whose “grief [was] not a cry for war.” With Phyllis Salome, she joined the Grandmothers Against the War weekly vigil in Rockefeller Center.

Having started work for New York State relatively late, Ella decided not to retire at 65 but to wait until her pension check would be large enough, as she put it, to be “worth carrying to the bank.” So she was still working last year at 75—and still volunteering for Met Council and going to the Grandmothers’ vigils—when, after a year of mysterious and undiagnosed pain, she was found to have ovarian cancer. Indomitable and indestructible as she seemed, this was one thing she couldn’t beat, although she gave it a hell of a fight before it beat her.

In mid-June, I flew from Paris to see her in the hospice. I sat by her bed for several hours on June 16, not sure whether she had recognized me or not. She died the next day, as I was flying back.

Ella was survived by her three daughters, Ann Matthews, Eileen Davis, and Rachel Matthews, and their partners; by four grandchildren she adored; by her brother, Martin Levine; and by a wide circle of friends, colleagues, and comrades, all of whom will continue to miss her for years to come. As Jenny Laurie says, “There were a lot of admirable people—mostly women—around Met Council during my years there. Ella was one of the few who was really a joy to spend time with.”

Jenny and Scott Sommer gave a moving tribute to her June 24 on Met Council’s WBAI program “Housing Notebook.” (You can listen to it until about September 20 at http://archive.wbai.org/show1.php?showid=housing; in “All Shows” window, go to “Housing Notebook.”)

Writer and journalist Judith Mahoney Pasternak edited Tenant for several years in the early ’90s and served on the Met Council board for two years as the organization’s cochair. She now lives in Paris.