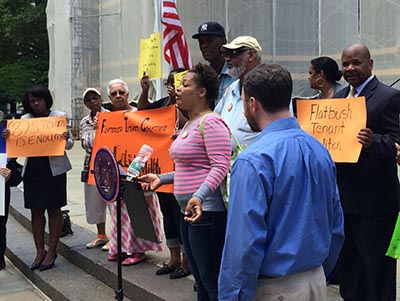 Tenants in the Prospect Lefferts Gardens section of Brooklyn have mobilized to stop a developer from building a 23-story tower they say will dwarf the neighborhood and accelerate gentrification—but were dealt a blow last month when a judge dismissed a lawsuit to stop construction.

The Hudson Companies has begun work on a 23-story, 254-unit building at 626 Flatbush Ave., one block from the southeastern edge of Prospect Park. The building would be the tallest in the area immediately surrounding the park. Its 203 market-rate apartments will average $1,875 a month for a studio and $2,800 for a two-bedroom, and 51 will be set aside as “low-income.”

Several neighborhood groups, including the Flatbush Tenants Coalition and the Prospect Park East Network (PPEN), filed a lawsuit to stop the building last December, saying that the state Housing Finance Authority, which has approved $72 million in public funds for the project, failed to do an adequate review of its potential environmental impact on the neighborhood. State Supreme Court Justice Peter Moulton issued a temporary restraining order stopping construction on May 30, but lifted the order and dismissed the suit on June 18.

Currently, neighborhood residents are trying to get Hudson to reduce the building’s size to eight stories—consistent with the rest of the area—and include more family-sized and low-rent apartments. The developer could create the same number of units by building “lower and wider,” says Ethan Hallerman of PPEN, and what’s “affordable” needs to be defined “in terms of what’s available for the neighborhood.” The low-income apartments are mainly slated for households with incomes ranging from about $29,000 for a single person to $42,000 for a family of four, but that’s more than what a home health-care aide, a common job in the neighborhood, makes.

Preventing displacement is a key concern. The area, predominantly Caribbean immigrants since the 1970s, is beginning to gentrify, with young whites moving in. This, Hallerman says, has led to an increase in landlords trying to evict tenants, discriminating by race in whom they rent to, and warehousing apartments.

“This building by itself is not responsible for that,” he says, “but it will accelerate it.”

“We are already seeing landlords in nearby buildings, in anticipation of the rising market rate 626 Flatbush will bring, doing everything they can by both legal and illegal means to raise rents and take their apartments out of stabilization,” PPEN wrote in a May 13 letter to Mayor Bill de Blasio. “Thus, while Hudson’s luxury high-rise may provide the community with some 50 units of ‘affordable’ housing, we believe this largely luxury building will actually result in a net loss of affordable housing for our neighborhood.”

Changing that will be difficult. Unlike Park Slope and Windsor Terrace, the more affluent side of Prospect Park, the eastern side has no zoning restrictions on height. Residents have been trying to get the area rezoned for an eight-story maximum for several years, but “the city hasn’t been very responsive,” says Hallerman.

Hudson has rejected the idea of building “lower and wider.” “We’re not going to change the building,” vice-president Alison Novak told the Brooklyn Eagle in June, noting that Patio Gardens, one block north, has two 16-story towers. PPEN member Jan Clausen describes the developer as “wedded” to the idea of getting “top dollar for exclusive views of the park.”

“In many ways, it’s a great thing for the neighborhood to bring in an 80/20,” Novak added. “I also think that adding market-rate units is a good thing.”

PPEN will appeal Justice Moulton’s decision, says Hallerman. It will continue to argue that the project’s environmental assessment report, a 20-page form filed with the Housing Finance Authority, is inadequate. On the form, he notes, Hudson stated that it was not aware of “any public controversy related to the proposed project” and unable to identify “any groups or organizations opposed.”

“We’re really waking up to what we’re up against,” says Clausen.