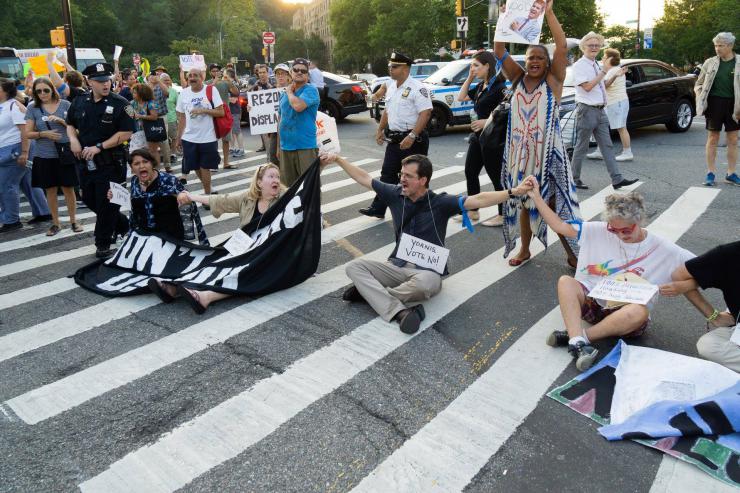 The plan rezones 59 blocks of the upper-Manhattan neighborhood to allow taller buildings and develop the area near the Harlem River waterfront, east of Tenth Avenue, now mostly businesses such as grocer y distributors and auto- repa i r shops. The administration says the plan will build 925 units of “affordable” housing on city-owned land, including tearing down the current Inwood Library and replacing it with one that would include a b o u t 1 7 5 apartments, and building a tech hub at Ninth Avenue and 219th Street that would contain 570 more.

The city also says another 675 affordable apartments will be built under its Mandatory Inclusionary Housing program. At least 25 percent of the 2,700 new apartments it projects will be built in the rezoned area will have to be affordable to households making less than 60 percent of the metropolitan area median income (AMI), or $56,340 for a family of three. That includes about 270 apartments for households making less than 40 percent of AMI. The “affordable” rents would work out to about $1,100 a month for a studio and $1,410 for a two-bedroom apartment, with a smaller amount going for $730 and $940.

Inwood’s median income is about $41,700, about 45 percent of AMI for a family of three, and there is a significant gap between the more affluent areas west of Broadway and the mostly Dominican-immigrant blocks to the east. Opponents argued that the rezoning would accelerate gentrification, forcing out both current residents and small 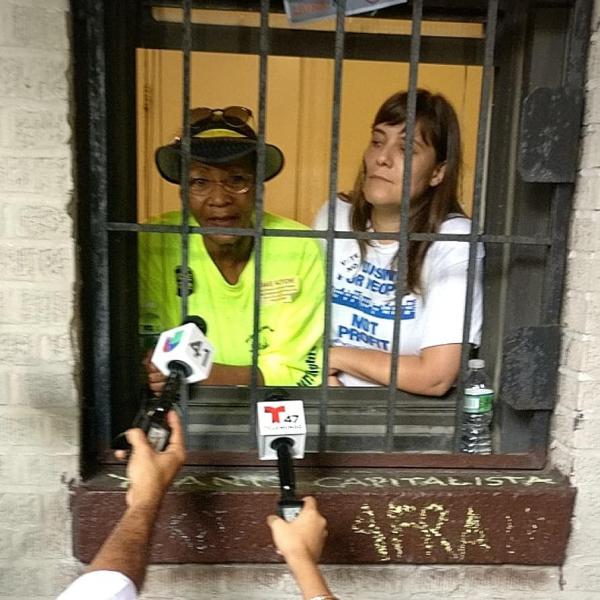 businesses: 75 per cent of the new units built by private developers will be market-rate.

“I think that as we talk about affordable housing and where we have 50 percent or more of the housing that will be coming in at market rate, we are not addressing the issue of homelessness and people who need housing, which is a larger majority of the city than those who can afford to pay the market rate,” said Councilmember Inez Barron of Brooklyn, the only dissenting vote.

“From secondary tenant displacement to toxic brownfields to overcrowded schools to dangerous emergency-response time delays to small businesses in peril to wildlife disturbance to economic apartheid to lack of appropriate infrastructure, the rezoning will be harmful in a myriad of ways,” Inwood activist Lena Melendez told Tenant/Inquilino.

Protesters threw fake money from the Council balcony before the vote, while waving brown signs that said “Shame” and red ones that read “Vote No on Inwood.”

Much of their ire was aimed at Councilmember Ydanis Rodriguez, who represents Inwood and Washington Heights. He had told rezoning opponents that he did not support the plan as it stood. But he changed his mind after winning several concessions from the administration, primarily the elimination of plans to allow high-rise construction on the “Commercial U” of West 207th Street, Broadway, and Dyckman Street.

“We have secured over $200 million in public funds for new commitments in our community,” Rodriguez said in a statement issued by the

mayor’s office after the vote. “We will bring over $50 million in STEM and robotics programming and capital, and a new P-Tech school at George Washington Educational Campus.”

“While we still believe that that costs of the rezoning far outweigh the benefits, we want to recognize and own the progress that the community was able to achieve,” says Met Council executive director Ava Farkas, who lives in Inwood. “Through building community power and organizing for three years, we were able to force the city to make major concessions that will protect small businesses and tenants.”

Those concessions, she says, include contextual zoning on residential blocks north of Dyckman Street and west of 10th Avenue that will limit height and density to their current levels; the removal of almost all of the “Commercial U” from the area to be upzoned; and the development of 100-percent affordable housing on three city-owned sites.

“Councilmember Rodriguez will own the consequences of his misguided decision to rezone Inwood,” Farkas adds.

As the Council almost always defers to local members on land-use issues in their own district, Rodriguez’s support ensured approval of the rezoning. On Aug. 2, the Council’s land- 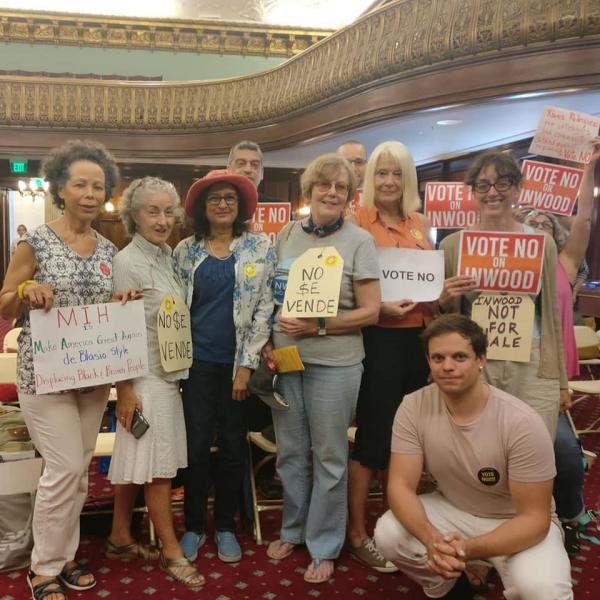 use committee passed it. On Aug. 3, protesters occupied his Washington Heights office to demand that he vote against the rezoning. On Aug. 6, nine people were arrested after a march through the neighborhood ended with a sit-in blocking traffic at Broadway and Dyckman Street.

“We must change the campaign funding system,” says Melendez, who was one of the nine. “Politicians are beholden to landlords and developers who donate funds to their campaigns. The result? Business and housing are becoming less and less affordable, and New York City will be exclusively for the wealthy.”

The rezoning is the fifth the de Blasio administration has done. The previous ones were in East New York, downtown Far Rockaway, East Harlem, and the Jerome Avenue area in the southwest Bronx.

“We succeeded in building a movement in Northern Manhattan which will continue to fight for affordable housing!” says Jeanie Dubnau of the Riverside-Edgecombe Neighborhood Association, a longtime local activist. “The occupation of Ydanis Rodriguez’s office and the traffic blockade are an indication that people are ready for more militant actions due to the dire need for affordable housing in New York. Such a movement now includes many groups, and will hopefully unite with a citywide movement which exists now but is separated into different groups.”