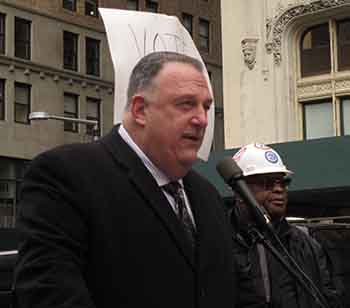 Two years after Mayor Bill de Blasio announced his plans to build 80,000 units of affordable housing and “preserve” another 120,000 within 10 years, how is he doing on that goal?

As of March 31, according to figures from the city Department of Housing Preservation and Development, the city is ahead of pace. About 14,000 new units had been built and more than 29,000 “preserved,” which means giving their owners tax breaks, loans, and various other incentives to keep rents affordable for the next 15 to 30 years. In 2015, HPD says, the city saw the “most new affordable housing ever built in one year.”

“The question is not ‘are they meeting their numbers?’ but ‘are they the right numbers to meet?’” says Benjamin Dulchin, head of the Association for Neighborhood and Housing Development, a coalition of neighborhood housing and community-development organizations. He praises the de Blasio administration for “building like gangbusters” and making more of a commitment to low-income housing than previous administrations, but says it’s “a little light on the low-income.”

For people making around the city median, the de Blasio administration did significantly better in its first two years than Michael Bloomberg’s did in his last five, averaging almost 4,000 more units created or preserved, according to HPD. It did slightly worse for “very low income” people, averaging about 300 a year less, but did more than twice as many “extremely low income” units than Bloomberg, who averaged less than 400 a year.

It is slightly behind its goals for both the number of units built and for the percentage of units built or preserved going to people below $39,000, which is intended to be 20%. HPD did not provide income levels for the apartments built.

“What they did for the first year and a half was not that different from Bloomberg, which is not surprising, because they were using the same tools,” says Tom Waters, housing policy analyst at the Community Service Society. Without the ability to build housing directly or preserve it by strengthening rent-control laws, the de Blasio program relies on leveraging the market, which makes it difficult to create lower-income housing.

It leverages the market through a complex system of tax credits, subsidies, and “mandatory inclusionary housing,” in which the city will rezone neighborhoods to let developers construct taller buildings in exchange for making 25% to 30% of the apartments in them “affordable.” That system relies on market rents and government aid subsidizing the lower rents enough to make the building profitable.

In practice, says Dulchin, the federal low-income housing tax credit produces housing for people at 60% of the metropolitan “area median income,” or about $47,000 a year for a family of three, while “preserved” apartments can go to those at 40% of AMI, about $31,000.

Extremely low-income housing “is particularly hard and particularly expensive to do,” he says. It generally needs direct and ongoing federal subsidies, as the city doesn’t have money to do rental subsidies.

“It takes more subsidy to hit these lower levels, but that doesn’t mean we’re not doing it,” an HPD spokesperson says.

The de Blasio administration’s main vehicle for creating lower-income housing has been HPD’s Extremely Low & Low-Income Affordability (ELLA) program, which gives direct construction subsidies of up to $75,000 per unit for apartments affordable to people making less than 60% of AMI, with 10% for people making less than 30%. Initial rents range from about $350 for a studio to $1,200 for a three-bedroom apartment.

The problem, says Waters, is that only a small number can be built, and the subsidies mean rents don’t have to cover the cost of construction, but they don’t cover operating costs. “To really change the game, you need an operating subsidy,” he explains. The city Rent Guidelines Board’s Income and Expense study, released last month, estimated the average cost of operating a rent-stabilized apartment outside “core Manhattan” at $794 a month, with about 27 percent of that taxes.

To put that in perspective: Even if the minimum wage were raised to $15 an hour, workers getting it would be “rent burdened,” spending more than 30% of their income, if they paid more than $750. An old person living on $1,150 a month in Social Security would need to pay less than $350.

Most of the 15 neighborhoods being considered for rezoning are “clamoring” for a higher percentage of truly affordable low-income housing, says Dulchin. The program, he adds, “should not be judged by the 200,000 goal, but by how it works for the neighborhoods”—whether it strengthens them or uses market forces that will destabilize them.

In places like East New York, says Waters, the administration is arguing that you can only get a certain amount of affordable housing. But it’s missing the point, he says, “to argue that since the city can only afford to help people who make $60,000 a year, people who make $30,000 should be happy with the results.”

A longer version of this article appeared in Gothamist.