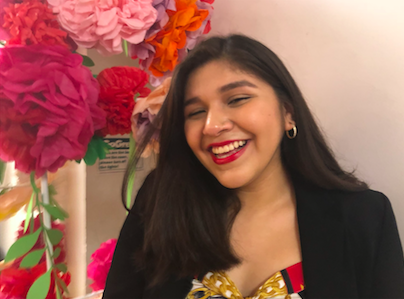 Johanna Monge joined Met Council’s staff as a community organizer in early December. She is now organizing tenants in the Washington Heights/ Inwood community, primarily over lack of services and major-capital-improvement rent increases.

“After graduating college,” Monge says, “I considered graduate school, but felt that I wanted to help my community. There are so many parachuters who come in and know little of the community. They stay for a short while; then, leave.” She calls this “parachute imperialism.”

rants, Monge grew up in a rent-stabilized apartment in Astoria, where she still lives. She came to housing issues at a young age, seeing the impact of gentrification on her neighborhood, a mix of tenants, small homeowners, and small businesspeople, largely workingclass and immigrant. As a high-school student at Brooklyn Tech, she took part in a social-science research program examining the effect of class and race on housing stability. The New York 1 news channel named her “New Yorker of the Week” for encouraging young people to be leaders. She also became involved in Queens Community Board 1, where she says she learned the importance of transparency in government and of finding common ground in communities.

“I always felt a need to help my community, and tried to learn how to do that in an effective way,” she says.

She graduated from Clark University in Worcester, Massachusetts, majoring in political science and minoring in urban social change, where she also was involved in the local community board. She says her experiences taught the importance of having a platform, resources, and being in contact with elected officials in order to achieve.

“At Clark, I was luck y to have wonderful mentors who encouraged us to be leaders and to pass that activism onto others,” she says

She spent two summers as a field coordinator and data collector for the University of Chic ago’s NowPow program, which uses data to connect people with health-care resources. The data she collected was used to allocate resources in Brooklyn’s Brownsville and Two Bridges in Lower Manhattan, and to ascertain the neighborhoods’ needs and compare them with available resources. Through Mt. Sinai Adolescent Health Center SPEEKS (Sinai Peers Encouraging Empowerment through Knowledge), she trained people aged 16 through 23 to be leaders, to channel their knowledge and experience to help themselves and others.

Through that work, Monge says, “I learned about the city and the needs of different people.” After graduation, she adds, she wanted to work locally because she believes that is the best way to effect change, and she was impressed by Met Council’s histor y and current work.

Most of the Washington Heights/ Inwood tenants she’s working with are dealing with MCIs, lack of services, and shabby repairs. She says it’s a challenge to motivate tenants who are “fed up.” The first meeting she held was about tenants’ rights, with the goal of empowering them with knowledge, mutual aid, and action. She believes in encouraging ever y tenant to be active in a committee or in some other capacity, and to take leadership.

Her immediate goal is to organize a press conference with tenants of the about 17 buildings in the neighborhood owned by Barbar y Rose Realtors, where residents say repairs ordered by Housing Court after they won an HP action suit were not up to standards.