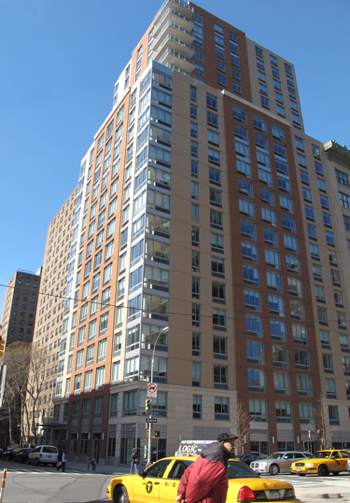 The New York City Housing Authority has temporarily postponed plans to lease land for luxury housing in eight public-housing projects in Manhattan, but the proposals are likely to go through before the end of the year.

“They’re determined to push this through before the next mayor comes in,” says Kflu Kflu, a public-housing organizer at Community Voices Heard.

The plan is to lease parking lots, playgrounds, and other vacant space on the sites to developers who would build “80/20 housing,” 80 percent luxury, 20 percent below market rent. NYCHA would then use the money generated to pay for maintenance and repairs. The authority hasn’t officially revealed all the eight sites, but they most likely will include the Douglass Houses on the Upper West Side; Campos Plaza, Meltzer Tower, and the Baruch, LaGuardia, and Alfred E. Smith Houses on the Lower East Side; and two more in East Harlem.

The eight sites would see a total of 4,000 to 4,500 apartments built. At the Douglass Houses, this would mean four new buildings.

NYCHA postponed its request for proposals from developers, which it originally planned to release in mid-March, but has begun holding meetings with tenants in the eight affected developments to tell them about its plans. With state aid eliminated and federal and city aid sharply cut, the cash-strapped authority—it had a $61 million deficit in fiscal 2012—says it has to find other sources of money to deal with its repair backlog.

“I think it’s regrettable, but I don’t know what alternative [NYCHA] has,” says Victor Bach, senior housing policy analyst at the Community Service Society and coordinator of the New York City Alliance to Preserve Public Housing. “There’s no government funding coming through.”

The deal will be hard to stop, says Kflu. The City Council and local community boards don’t have a say in the decision. NYCHA simply has to gain approval from the federal Department of Housing and Urban Development, which requires that housing authorities “consult” with tenants if they plan to lease or sell property on their buildings’ site.

With that in mind, activists and tenants are focused more on ensuring that tenants’ voices are heard in the process and can negotiate what Kflu calls “a community benefits agreement.”

Specific concerns will vary from project to project, but they include the loss of open space, what community space will be available, what kind of stores and businesses will go in the new buildings, whether project residents will get jobs in those businesses, whether they’ll get priority for the affordable apartments in the new buildings, whether more of the apartments built can be genuinely affordable, neighborhood gentrification, and school overcrowding. The school closest to the Douglass Houses is already holding classes in trailers, says Louis Cholson-Brown, cochair of Community Board 7’s housing committee, and a 20-story building will open nearby next year.

“Obviously, we’re very concerned about the impact they could have on quality of life, says Lucy Newman, a staff attorney at the Legal Aid Society. She says there needs to be “meaningful consultation” with tenants, not just a hastily called meeting where tenants are given highly technical documents they haven’t seen in advance.

“Tenants by and large have no idea what’s happening,” says Cholson-Brown. “Most of the people we contact are absolutely unaware of this, that they’re losing open space, losing a parking lot, losing a playground.”

Tenants didn’t find out this was happening until last month, he says, and NYCHA still hasn’t revealed the exact sites. “Is funding so dire they cannot take two months to talk to the community?” he asks.

“Unfortunately, communication between NYCHA, elected officials, and tenant leaders has been fairly limited at this point…. Further, many critical details, such as specific site plans, proposed densities and unit counts have not been made available for all sites,” said a Feb. 20 letter to Mayor Michael Bloomberg and NYCHA chair John Rhea from Rep. Carolyn Maloney, Assembly Speaker Sheldon Silver, Manhattan Borough President Scott Stringer, four state senators, three other Assemblymembers, three City Councilmembers, and three community-board chairs. The letter also urged “a robust community engagement process” before any new development on NYCHA land and “greater transparency in the potential development plans and a reconsideration of the expediency of the proposed timeline.”

The authority has met with tenants at the Alfred E. Smith Houses and Campos Plaza, in what Bach termed a sophisticated presentation, featuring NYCHA board member Margarita Lopez, eight high-ranking authority officials, and three video screens, one in English, one in Spanish, and one in Chinese. Lopez said that the below-market apartments in the new buildings would remain that way permanently. Campos Plaza’s tenant association strongly supports the proposal, but the head of the Smith Houses group opposes it.

“We’re trying to make sure that residents and the community at large have a strong voice,” says Bach. “There are ways they need to mobilize so NYCHA doesn’t steam over them. New York City has to set its own standards for resident consultation.”

While Kflu understands the issue as “funding, funding, funding,” he questions why luxury housing should be built on public-housing land. He notes that NYCHA pays the Police Department $75 million a year, when “nobody in New York has to pay double for police.” He suspects the underlying motive is Bloomberg and Rhea’s “overall ideological bent,” preferring market solutions and private-sector ownership to public control.

Rhea told City Limits magazine that increasing the percentage of affordable apartments would decrease the amount of money NYCHA could get for leases, because developers don’t get an additional tax break for buildings with more than 20 percent below-market apartments. And the definition of “affordable” is very stretchable. In an infill project built on a former parking lot at the Elliott-Chelsea Houses on Ninth Avenue that opened last April and is all below-market, about two-thirds of the 168 units rented for more than $2,000 a month and were available only to households making more than $100,000 a year. Less than a quarter were available to households making less than $38,400, and 45 rented for more than $3,400.

Rhea also told City Limits that the term “luxury housing” was “spin to create class warfare, portraying those with the means to pay market rate as wealthy and stealing.”

The authority, which announced plans to try to raise revenue from “underused” property in “prime-market” developments in December 2011, is likely to expand this scheme beyond the original eight projects, so tenants in other projects “shouldn’t relax,” says Bach. “A lot of developers have their eye on high-market land.”

“This is only the first wave,” he says. “This is a much larger issue than it looks now.”