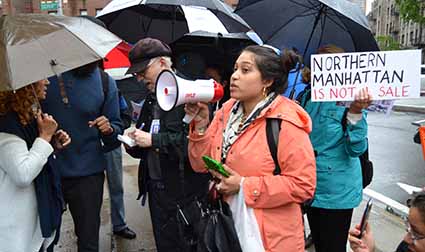 Last August, after a wave of protests by neighborhood residents, the City Council defeated a plan to rezone 4650 Broadway in Inwood to let a developer build a 17-story luxury building there.

On the rainy evening of May 22, about 75 to 100 people returned to the site to protest the city’s continued plans to rezone the neighborhood under the de Blasio administration’s “mandatory inclusionary housing” policy. That would allow more luxury development in exchange for a percentage of the units built being “affordable.”

“We have one message: It’s not affordable for us,” local activist Estevan Nembhard told the crowd.

“Why is the city only choosing working-class and communities of color?” Graham Ciraulo of Northern Manhattan Is Not for Sale asked rhetorically. “These are the communities the real-estate industry wants to gentrify. We are obstacles.”

The current Economic Development Corporation plan for the neighborhood “is not acceptable,” he told Tenant/Inquilino before the rally. Community demands were “ignored, and in some cases turned on their heads,” he said. For example, people wanted contextual rezoning, limiting the height of new buildings to not too far above what’s common in the area, but the plan would “upzone” business corridors, allowing significantly taller buildings to be constructed. Also, the plan does not include the area more than one block south of Dyckman Street, so the 4650 Broadway site, at the intersection of Sherman Avenue with a view of Fort Tryon Park, would not be protected from luxury development.

More than 60 percent of the contributions to Mayor Bill de Blasio’s re-election campaign have come from real-estate interests, Ciraulo added. Real-estate companies have been buying up properties along Sherman Avenue, he said, and Taconic Investment Partners is eyeing the area east of Tenth Avenue. 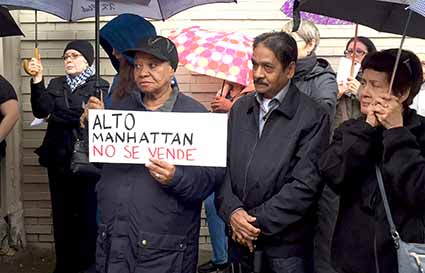 Other community concerns, listed on a flyer handed out at the rally, include what percentage of the apartments built under the plan will be “affordable”; who they will actually be affordable for; and whether the rents will be permanently restricted or be allowed to go to market rate after 30 years. Information in Spanish is crucial, Guzman said, because in the heavily Dominican-immigrant neighborhood, “a lot of people don’t speak English well enough.”

“We believe the city is rushing this through,” Ciraulo said. “Why isn’t the city making a stronger effort to develop 100 percent affordable housing on publicly owned land?”

The march coincided with a telephone town-hall meeting on the plan held by City Councilmember Ydanis Rodriguez, who represents the area. A dozen-odd marchers called in on their cell phones, trying to broadcast the meeting by putting them on speakerphone and holding them up to a bullhorn. It didn’t work that well, and they had little success asking questions too. “It turns out all the questions were prescreened,” said Nembhard.

They held up their phones and chanted, “Ydanis, comprende, Alto Manhattan no se vende.” (Ydanis, understand. Upper Manhattan is not for sale.)

The mayor’s press office and Rodriguez’s office did not answer an emailed list of questions.