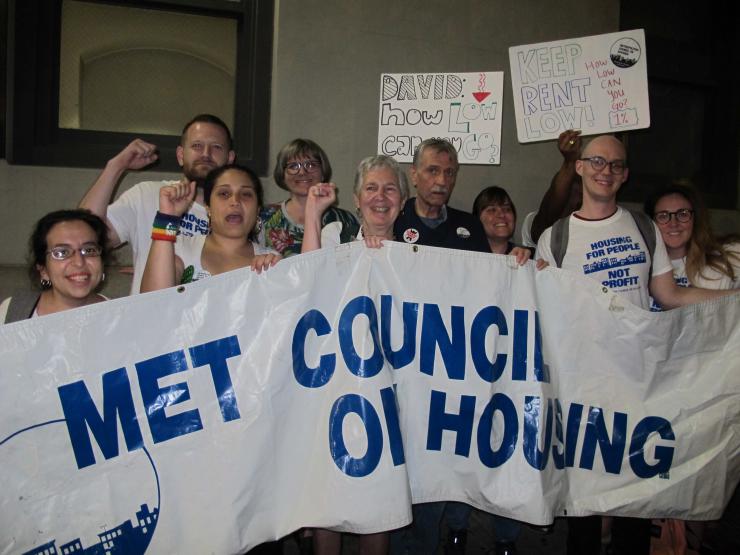 The Rent Guidelines Board’s two tenant representatives took the lesser of two evils June 27. They sponsored a proposal to end the partial rent freeze of the last two years and let landlords raise rents in rent-stabilized apartments by 1.25 percent for a one-year lease renewal and 2 percent for two years. All five public members joined them to pass it by a 7-2 vote.

Tenant representative Harvey Epstein made the proposal after listing statistics about the city’s housing crisis, noting that the RGB has allowed increases that have exceeded owners’ costs by almost 25 percent over the last 25 years, and asking why no large landlords testified at the board’s five June public hearings. The more than 500 protesters who packed an auditorium at Baruch College shouted “RENT ROLLBACK” when asked, “So what do we need?”

“While we need it, that’s not what we’re getting today,” Epstein answered. “Our goal is to continue this fight, knowing we’re not going to get a rent freeze here today.”

“It was our proposal or a higher proposal,” tenant representative Sheila Garcia told protesters after the meeting. Epstein said the five public members would have preferred increases of 2 and 4 percent.

The RGB’s studies showed that landlords’ net operating income went up by almost 11 percent in 2015, East Village resident Kathleen Wakeham said, but “no tenant has received such an increase in wages, pensions, or SSI.”

“It is unfortunate that Mayor de Blasio was afraid of the optics of a third year of a partial rent freeze, when everyone in and around city government knows that nothing short of a serious rent rollback would correct for the gigantic, unjustified rent increases the Bloom berg board adopted during the recent recession,” Met Council executive director Ava Farkas said in a statement. “The least that tenants deserved this year was another zero for one-year lease renewals.”

The board also voted 7-2 to freeze rents on single-room occupancy hotels and rooming houses. 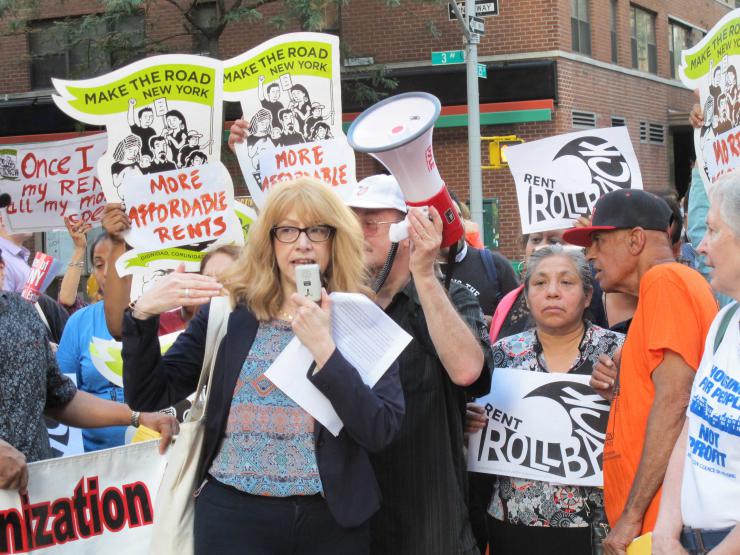 RGB chair Kathleen Roberts said in a statement that a small increase was the best way to balance tenants’ inability to afford apartments with landlord expenses such as rising fuel costs. Public members Hillary Botein and David Reiss said tenants’ testimony at the public hearings had “made clear the extremity of the housing crisis in the city, and that it will get worse without significant intervention.” But Botein lost the crowd with the next sentence, setting off loud booing when she said those witnesses were “not a representative sample of rent-stabilized tenants.”

She went on to say that rent stabilization was an “imperfect vehicle” for protecting low-income tenants, because it is not pegged to income, either by caps on household rents or limits on household eligibility, and suggested that a SCRIE-style program subsidizing rents would be more effective. The booing stayed so loud she had to stop.

Tenants who face eviction in Bronx Housing Court are typically people who make less than $20,000 a year and spend half of it on rent, Fitzroy Christian of Community Access for Safe Apartments responded after the meeting. By saying they were not representative, he added, Botein was “disrespecting poor people and being dismissive of truth,” in order to justify a rent increase.

“A lot of the anger and frustration could be directed at Albany,” Botein told Tenant/Inquilino. She cited preferential rents, the 20 percent vacancy increase, and major-capital-improvement increases as issues beyond the RGB’s power. Told that tenants had been lobbying the state legislature on those issues for years, but had been consistently stymied by the state Senate’s gerrymandered and real-estate-financed majority of Republicans from outside the city, she answered that she didn’t work in Albany.

Security delayed the meeting’s start by more than an hour. The crowd had to pass through metal detectors one at a time, as rubber-gloved campus police went through their bags and called out, “cell phone, wallet, coins.” Tenants passed the time by chanting and doing the limbo under a jump rope in front of the stage, to a chorus of “how low can you go?” 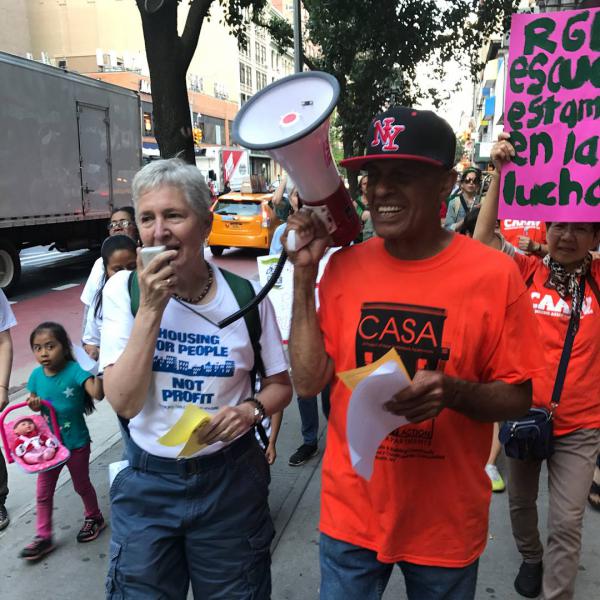 “This wouldn’t have happened 20 years ago,” said longtime housing and labor activist Rafael Sencion. He credited extensive organizing in Latino communities, which were represented by contingents from Mirabal Sisters in Upper Manhattan, Good Old Lower East Side, Woodside on the Move and Catholic Migration Services in Queens, Neighbors Helping Neighbors and the Fifth Avenue Committee in Brooklyn, and CASA and the Northwest Bronx Community and Clergy Coalition.

“We knew coming in that it was impossible to get a rollback,” Sheila Garcia said afterwards. “We know tenants will be homeless and displaced… but it was a lot better than what we could have gotten.” The 1.25 and 2 percent increases were the lowest “we could get them to vote for,” she said.

The RGB’s limits on annual rent increases are also “completely irrelevant” to the 31 percent of tenants who have preferential rents, she added, because they only affect the legal rent, not the percentage increase allowed on what the tenant is actually paying.