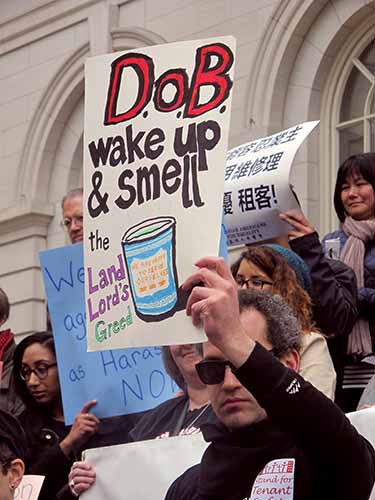 With the City Council having taken no action in almost a year on 12 bills intended to curb “construction as harassment,” housing activists are pressuring it to move.

“We demand a systematic reform of the Department of Buildings,” Rolando Guzman of the St. Nicks Alliance in Brooklyn told about 150 people at a rally in front of City Hall Feb. 23. “We cannot afford tenants being displaced by construction as harassment.”

The rally was organized by Stand for Tenant Safety, a coalition of more than 20 housing, legal, and neighborhood groups, including Met Council.

The 12 bills were introduced in the fall of 2015. They include measures that would require the Buildings Department to do a full inspection before allowing construction in a building that’s partially occupied; increase fines for violations and enable the city to put liens on property when owners don’t pay them; and concentrate enforcement on buildings, owners, and contractors with a history of violations.

The Council has held hearings on seven of them, the most recent in April 2016, and taken no action on the others. Urban Justice Coalition lawyer Jane Li told Tenant/Inquilino that Housing Committee chair Jumaane Williams has promised that hearings will happen by June. A spokesperson for Williams told The Indypendent in February that he “is in continued discussion with the Speaker and sponsors of the bills on the package.”

“I think we’re close,” Councilmember Helen Rosenthal (D-Manhattan) told Tenant/Inquilino. Intro 944, which she cosponsored with Corey Johnson, is intended to stop owners from falsely claiming the building is not occupied. It would require the Buildings Department to post the occupancy status of buildings where permits have been granted on its Web site, and for permits posted on the building site to include that information. She says this is “not controversial.”

“I am very confident these bills will be passed,” Councilmember Margaret Chin (D-Manhattan) told the rally. She’s cosponsor of Intro 918, which would prohibit contractors from “self-certifying” to qualify for construction permits in buildings where more than 10 percent of units are occupied or the landlord has been found guilty of tenant harassment.

The bill its sponsor calls a central part of the package may be the one with the most complications. Brooklyn Democrat Stephen Levin’s Intro 934 would require the Buildings Department to create a “Real Time Enforcement” unit. It would have to conduct inspections within two hours for complaints about work being done without a permit, and inspect buildings where more than 10 percent of the floor area is being altered within five days after works starts, plus periodic unannounced inspections afterwards.

The rationale, explains Julie Bero, Levin’s legislative director, is that “by the time DoB shows up to check the work that’s going on illegally, often it’s already over.” However, she says, the department has expressed concerns that it doesn’t have enough capacity to handle that kind of demand.

“As we work to strengthen tenant protections, DOB is embedded in a joint city and state task force with the Attorney General that conducts weekly sweeps to fight tenant harassment,” a department spokesperson said. “We and our task-force partners use every tool to protect vulnerable New Yorkers, including bringing criminal charges against landlords who harm tenants.”

In 2016, it inspected 2,179 properties where there were complaints of tenant harassment, and issued 2,163 violations and 276 stop-work orders. 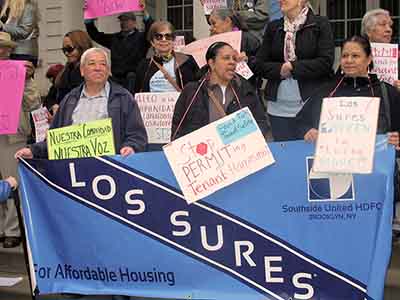 Tenants at the rally told of their own experiences with construction done in a way that harasses them. Ben Coopersmith, who’s lived in an Icon Realty-owned building in the East Village for 20 years, spent a year without cooking gas. When Icon dug an 8-foot-deep ditch in the sidewalk to do work in the basement, he says, they put a wooden plank over it so people could get into the building. When Coopersmith brought his 4-year-old daughter home from preschool, “we were walking the plank, as it were.”

Idalys Savinon, 47, is now the only tenant left in the seven-unit brownstone in downtown Brooklyn where she lived since her parents immigrated from the Dominican Republic when she was three. Last fall, the building was bought by the Ink Property Group, a privately held real-estate investment, management, and development firm whose more than 35 city properties are concentrated in gentrifying areas such as Williamsburg, Bushwick, and Flatbush.

Demolition and renovation work began in January. “They destroyed all the apartments,” she says. “They gutted everything. The dust was unbelievable.” She’s spent the last two months without heat or hot water, boiling water to take baths—but then on Feb. 22, the day before the rally, her gas was cut off.

Ink offered to relocate her, telling her that the staircase to her fourth-floor apartment had to be moved. “It’s going to be difficult to stay here with no staircase,” she says one man told her.

“The longer we wait, the more bad landlords will capitalize on trying to push vulnerable tenants out of their homes,” says Jane Li.