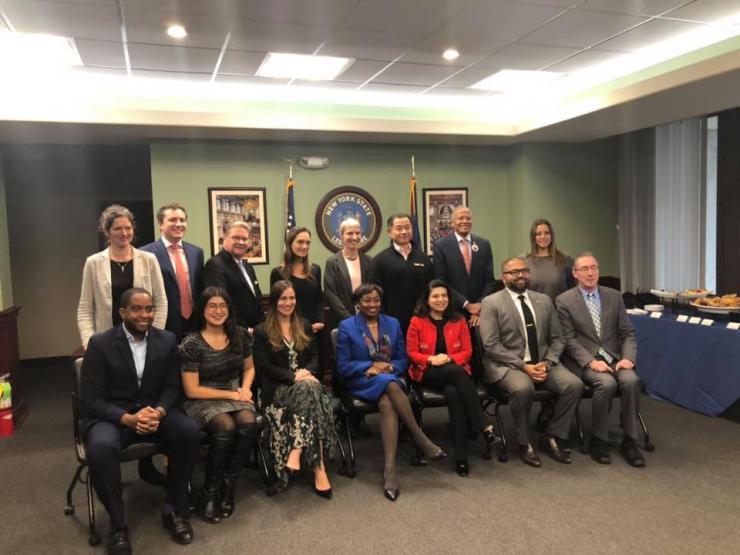 With turnout up almost 50 percent from four years ago, voters in New York State elected a strong Democratic-Working Families majority to the state Senate on November 6, ending more than five decades of total or de facto Republican control.

Following the rout of the Independent Democratic Conference (IDC) in the September 12 primary, the results mean that, when the new legislature is seated in January, real Democrats under the progressive leadership of Andrea Stewart-Cousins of Yonkers will have a majority of as much as 39-24 in the Senate, counting Simcha Felder of Brooklyn with the Republicans.

This is great news for tenants in New York City and around the state, who have seen rent and eviction protections gutted by the legislature over the past 25 years, causing the loss of hundreds of thousands of affordable units and triggering unprecedented homelessness and affordability crises.

The new alignment in Albany will put Gov. Andrew Cuomo in a tight spot. In his first two terms, he was able to hide behind the Republican majority in the Senate—which he helped create and perpetuate—as an excuse to avoid action on a broad range of issues, including ethics and campaign-finance reform, health care, criminal-justice reform, public schools, and mass transit. When the Republican majority was slipping, Cuomo was instrumental in creating the IDC, who gave the GOP the additional votes it needed to retain control.

Progressives around the state prepared vigorous primary challenges to take out the IDC. Late last year, Cuomo attempted to pre-empt this by trying to broker a deal in which the IDC would return to the Democratic fold, but under a power-sharing agreement which would have given IDC leader Jeffrey Klein (Bronx-Westchester) veto power over what bills could come to the floor. Since Klein was the leading recipient of real-estate contributions in the legislature, it was not hard to foresee what kinds of bills he would suppress.

In April, the Working Families Party state committee voted to endorse actress Cynthia Nixon against Cuomo in the Democratic primary, along with Brooklyn City Councilmember Jumaane Williams for lieutenant governor. The Nixon-Williams campaign denounced Cuomo’s failure to advance progressive legislation, tying it to his having received millions of dollars in contributions from special interests, notably real estate.

Faced with this challenge from the left, Cuomo reversed course on many issues within a few weeks, including possibly legalizing marijuana, banning single-use plastic bags, addressing the city public housing’s funding crisis, expanding voting rights to felons on parole, and separating teachers’ evaluations from their students’ test scores—all of which he opposed before Nixon announced her candidacy.

One of the biggest about-faces Cuomo made concerned the IDC, which Nixon made a centerpiece of her campaign. In early April, he announced that he had “convinced” the eight IDC members to return to the mainstream Democratic bloc. He and his IDC allies hoped that would make them safe from primary challenges. But the Working Families Party, and allies including NoIDCNY, New York Communities for Change, Make the Road Action, and NY Progressive Action Network—an outgrowth of Bernie Sanders’ 2016 presidential campaign—united around mounting serious challenges to all eight IDC members, many of whom appeared to be in safe districts. Nixon and Williams campaigned with the IDC challengers. And in the primary September 12, six of the eight IDC members lost, including Klein, who had looked untouchable.

With Nixon dropping out of the race after losing the Democratic primary, the WFP needed to get at least 50,000 votes for its gubernatorial candidate to retain its ballot status for the next four years. In order to focus on state Senate and congressional races, it made a difficult tactical decision to endorse Cuomo in the general election rather than squander scarce resources on a futile protest campaign against him, and face the small but dangerous chance that Cuomo could lose to his even worse Republican opponent Marc Molinaro, as his father, Mario Cuomo, had lost to relatively unknown Republican George Pataki in 1994.

The WFP endorsement confused some supporters who agreed with the party’s strong criticism of Cuomo during the primary campaign. But it wound up with 106,000 votes, more than twice the number needed to keep its ballot line, according to unofficial results from the state board of elections.

When the new legislature is seated in January, closing the loopholes in the Rent Stabilization Law—temporary preferential rents, the 20 percent vacancy bonus, permanent increases for improvements, and vacancy deregulation—will be a top priority for many returning and newly elected legislators. Met Council participated with the Upstate Downstate Alliance in a conference in Rochester October 20-22 that produced a “Fair Housing for All” agenda that would expand rent and eviction protections statewide, so that legislators will not be divided by what has been portrayed in the past as an issue that affects only New York City and about 40,000 tenants in its suburban counties.

Repealing the 1971 Rockefeller-Urstadt Law to restore New York City’s ability to pass its own rent and eviction protections will also be on the table. There is also a proposal for a “reverse Urstadt” that would let local governments pass stronger protections than the minimum provided by state law in response to housing emergencies, and forbid them to weaken protections already enacted.

Cuomo spokeswoman Hazel Crampton-Hays said after the election that he is “committed to working with the new legislature to… advance additional tenant protections.”

“I look forward to working with my many new pro-tenant colleagues to improve the lives of renters, and defend and expand affordable housing, by finally passing legislation that has passed the Assembly and died in the Senate for decades,” Senator Liz Krueger of Manhattan noted.

But it won’t be a walk in the park. Real-estate interests stepped up their contributions to Senate Democrats before the election.

“With a Working Families-Democratic majority, the Senate will be much more pro-tenant than it has been in the past, but at the same time, real-estate money will dig in deep to try to stop change,” says Karen Scharf, outgoing director of Citizen Action NY and a state co-chair of the WFP. “That is why it is critical to quickly pass democracy reforms by establishing a statewide small-donor matching fund in the state budget, similar to New York City’s, so that legislators will know they will be able to get re-elected without having to depend on special interests.”