About 30 people gathered June 2 in Boston to protest US Bank’s refusal to accept rent from people in foreclosed houses it owns. Massachusetts State Rep. Liz Malia and Boston City Councilor Charles Yancey tried to deliver Drusilla Francis’s rent check for June to the bank, but they were not allowed in to the office. 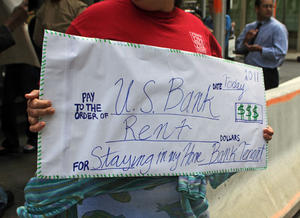 Francis, who is disabled, lives in a two-family home in the Dorchester section of Boston with her two foster children. She can afford to pay rent, but US Bank won’t take it. She has been paying her “use and occupancy payments,” but the bank told her she had to be out by May 31.

City Life/Vida Urbana, which organized the protest, says it “will block this eviction if necessary.”

The group is also trying to prevent the eviction of eight other foreclosed homeowners in Boston. In those cases, a nonprofit called Boston Community Capital has offered to buy the homes and approved the residents for a new mortgage, but the banks have either rejected the offer or failed to respond.

“Thousands of families in Massachusetts and millions nationally are evicted by banks after foreclosure,” a flyer for the protest said. “They really wanted to pay rent. But the landlord, the foreclosing bank, won’t accept the rent. The foreclosing banks insist on no-fault eviction.”