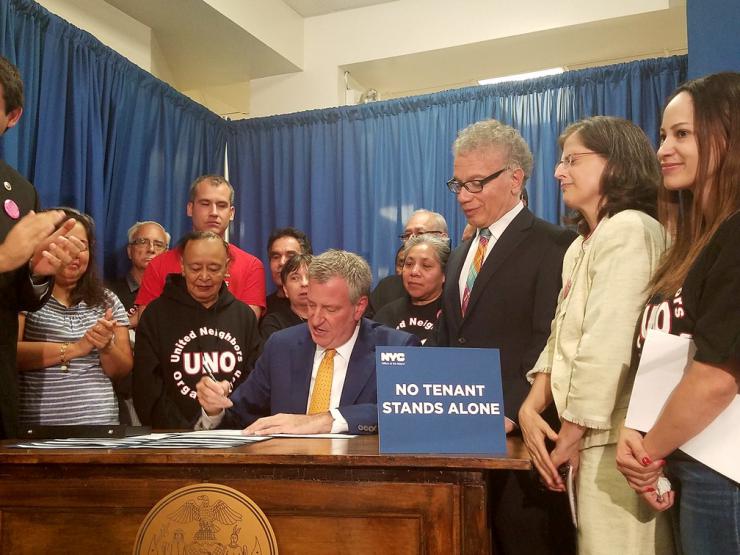 Nearly two years after they were first introduced, the City Council on Aug. 9 overwhelmingly passed 11 bills in a 12-measure package intended to curb “construction as harassment,” the practice of landlords trying to drive tenants out by using demolition and renovation to create noxious conditions. Mayor Bill de Blasio signed them Aug. 30.

The new laws “are going to keep both rent-stabilized and unregulated tenants in their homes,” and show that the city is “not tolerating unsafe practices,” says Met Council coordinator Andrea Shapiro. The 12 bills were part of a package promoted by Stand for Tenant Safety, a coalition of more than 20 housing, neighborhood, and legal-services organizations. The Council also passed five other bills intended to help tenants fight harassment, such as by making it easier to prove harassment, and preventing landlords from visiting or contacting tenants at odd hours without their consent.

“For too long, landlords have wielded construction like a weapon against tenants,” said Marika Dias, director of the Tenant Rights Coalition at Legal Services NYC. “By strengthening our tenant harassment laws and Department of Buildings protections for tenants, while also increasing penalties and enforcement against landlords who refuse to respect tenants’ rights, these laws give tenants multiple new ways to fight back.”

“Construction as harassment” involves the demolition and renovation of vacant apartments in a manner intended to “make life miserable for the tenants they’re trying to move out,” explains Kerri White, director of organizing and policy at the Urban Homesteading Assistance Board. It’s a “double bonus” for unscrupulous landlords, because they can add the cost of the renovations to the rent on vacant apartments, and if any tenants move out after their ceiling collapses or they spend a month without cooking gas, the owner can renovate their apartments and charge more.

The practice emerged after the state weakened the rent-stabilization laws in 1997 to let landlords deregulate rent-stabilized apartments if the rent is high enough. It has become widespread over the last decade. Steven Croman, who combined maximumnuisance construction with trumped-up eviction lawsuits and aggressive demands that tenants leave, became the poster child for it before he pleaded guilty to fraud charges in June, but it has proven a highly profitable business model for East Village/Lower East Side building-flippers such as Ben Shaoul. It has also spread to gentrifying neighborhoods such as Williamsburg, Greenpoint, Bushwick, and Ridgewood.

The 11 bills passed take on various aspects of the problem. Two will increase fines for violating a stopwork order or doing construction work without a permit. Others will enable the city to put liens on buildings that owe significant amounts of fines and have the Department of Buildings withhold permits for major work from owners who owe more than $25,000 in unpaid fines. One will require that the occupancy status of any building where a permit has been issued be posted on both the department’s Web site and on-site permits, to make it harder for landlords to get away with claiming that the building is unoccupied. Others beef up current rules for tenantprotection plans.

The measures are important, says White, because they enable the Department of Buildings to address problems it was not prepared to deal with in the past, to enforce regulations against a “pattern of behavior” instead of just individual violations like continuing construction after a stop-work order has been issued.

“This really comes from a lot of different angles,” says Emily Goldstein, senior organizer at the Association for Neighborhood Housing Development.

One key measure, says Jane Li, a staff attorney at the Urban Justice Center’s Community Development Project, is Intro 918-A, sponsored by Councilmember Margaret Chin (DManhattan), which passed 41-1. It will increase the amount of auditing the Department of Buildings has to do on applications for permits, instead of letting landlords hire their own professionals to certify their work. Specifically, the department will have to audit 25 percent of those applications in rent-regulated buildings, affordable-housing projects, or buildings that are being investigated for rent overcharges, and go over the documents monthly.

That bill was a “big win,” Li says. The 25-percent figure was arrived at after much negotiation with the Buildings Department, which objected that it didn’t have enough resources to do audits that extensive.

The one bill out of the 12 that did not pass, however, is what Li calls “the crown jewel of our package.” Intro 934, sponsored by Councilmember Stephen Levin (DBrooklyn), would create a “real-time enforcement unit” that would have to do inspections for complaints about work being done without a permit within two hours after it receives the complaint. It would also have to inspect buildings where a significant amount of construction is being done within five days after work starts, and do periodic unannounced inspections afterwards.

“By the time DoB shows up to check the work that’s going on illegally, often it’s already over,” Julie Bero, Levin’s legislative director, told Tenant/Inquilino at a City Hall rally in February. But the department, Li says, objected that it didn’t have the resources to handle that kind of demand. The bill is still being negotiated.