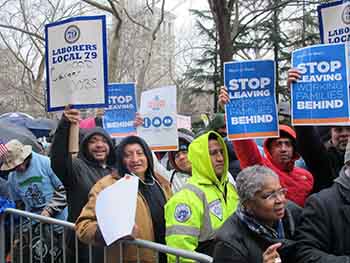 Chanting “Get up, get down, New York’s a union town” while being dusted with a cold drizzle, several hundred people rallied outside City Hall Park Feb. 23 to demand improvements in Mayor Bill de Blasio’s housing plan.

Organized by the Real Affordability for All coalition, the protest had two main points: The mayor’s “mandatory inclusionary housing plan needs much more housing that people who make less than $40,000 a year can afford, and that housing needs to be built with union-quality jobs. Union construction workers made up much of the crowd, with the largest contingent coming from Laborers Local 79.

“I don’t know a single person in my neighborhood who could afford this,” Bronx resident Lourdes de la Cruz told the crowd. “It’s mandatory exclusionary housing.”

“We feel there needs to be deeper affordability, a path to good construction jobs, and a path to union jobs,” Gary LaBarbera, president of the Building and Construction Trades Council of Greater New York, said before the rally. If the city does not require union safety standards, he told the crowd, the winners will be “rich real-estate developers… who use irresponsible contractors.” Of the 16 construction workers killed in accidents last year, he said, 15 were on nonunion jobs.

“Most of the people in our community make $17,000-$25,000 a year. They don’t qualify,” Edwin Figueroa of the South Bronx Community Congress said as protesters gathered. “We feel that this is a sham.”

The de Blasio administration says other subsidies will enable some of the 80,000 apartments it expects the plan to generate to be cheaper. It also argues that because the program is based on a zoning-law change, it can’t mandate either union-scale wages or safety standards.

“Under the mayor’s plan, the construction workers who build this housing won’t be able to afford to live in it. We need housing, we need careers,” says Local 79 organizing director Chaz Rynkiewicz. “That it doesn’t address safety issues, career issues, is disgusting and irresponsible.”

“I’ve seen a lot of accidents. It has to stop,” said Christian Mejia, who spent three years working for U.S. Crane and Rigging, a nonunion contractor that has been hired for numerous affordable-housing jobs. It’s one of several outfits run by the Auringer family, which the Ironworkers-backed New York City Community Alliance for Worker Justice says has “a record of irresponsible behavior against workers” that includes wage theft, racism, and dangerous jobsite conditions.

Wage theft is “rampant throughout the city” on nonunion construction jobs, Ironworkers organizer Eddie Jorge told LaborPress, while trying to help workers at an East Harlem site who hadn’t been paid in three weeks. The abuses are most common in buildings less than 10 stories tall in Upper Manhattan and the outer boroughs, which are almost all nonunion jobs—and where the bulk of the affordable housing built will be. “With all the rezoning, we’re going to see a lot more of this,” he said. “If there’s no labor standards put on it, it’s going to be worse.”

While the building trades have lined up against the plan, the city’s main service unions, including SEIU Local 32BJ, 1199SEIU, District Council 37, the United Federation of Teachers, and the Hotel Trades Council, have endorsed it, saying it will provide desperately needed housing, and that if it doesn’t go through, it won’t provide any.

“Our president is with this, but I’m not,” said Edwin Figueroa, who is a 32BJ member. “It’s a shame that service unions are behind this plan. Where does a dishwasher, a doorman, a school cleaner fit in? They don’t make that kind of money.”