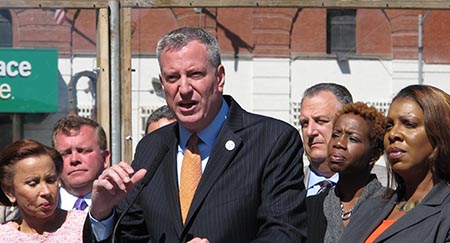 Calling it the “largest, most ambitious affordable housing plan ever” from any U.S. city, Mayor Bill de Blasio on May 5 announced his vision to build 80,000 new units of affordable housing over the next 10 years while preserving another 120,000. “The crisis is greater than ever before,” the mayor said at a press conference in Brooklyn, adding later in the Bronx that housing costs have “undermined the very idea that people can live in New York long-term, that people can stay in their own neighborhoods.”

His plan, de Blasio said, would build more than four times as many apartments for very low-income people than Mayor Bloomberg’s programs did. Yet the plan is likely to fall far short of solving that crisis.

In documenting the depth of the problem, the plan notes that the city has about 980,000 households who earn less than $42,000 a year—including more than half of its renters—and about 360,000 of them spend more than half their income on rent. It says there are about 425,000 apartments that rent for $1,050 or less (about 40 percent of them in public housing), what these households could afford without spending more than 30 percent of their income on rent.

That’s a shortfall of more than 550,000 units. The de Blasio plan would build about 16,000 apartments for this income group—more than twice as many as Bloomberg did, but not quite 3 percent of what it implies are needed.

This would replace the 80/20 formula, in which luxury housing developers could get tax or zoning breaks if they agreed to include up to 20 percent below-market units.

The plan is “the outer limit of what can be achieved in a decade,” the mayor said. The administration estimates its cost at $41 billion, including $8.2 billion in direct city investment. But it is limited by three major constraints.

First, although there are almost 250,000 people on the waiting list for the city’s public housing, public-housing construction is “essentially frozen” due to a lack of funds, de Blasio said.

Second, while the plan calls for preserving 120,000 currently affordable apartments, state law lets landlords deregulate vacant rent-regulated apartments if the rent can be raised to $2,500 or more, and the market is inexorably pushing rents toward that threshold all around the city. More than 250,000 apartments have been decontrolled since the first version of that law was enacted in 1993. “We have lost more units through deregulation than this ambitious plan calls for producing!” says Larry Wood of the Goddard Riverside Community Center. “If we keep losing affordable rent-regulated units through vacancy decontrol, all the new production will be meaningless.” 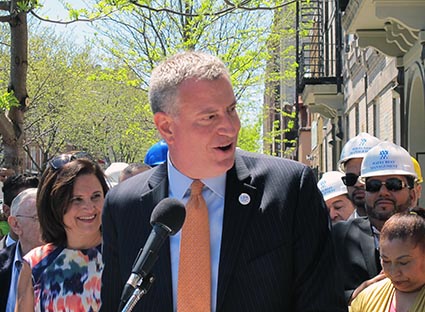 The plan calls for repealing the state Urstadt law, which prohibits the city from strengthening its rent laws, but does not urge the repeal of vacancy decontrol. “We will work with the state as rent regulation comes up for renewal in 2015 to prevent abuses of the vacancy and luxury decontrol provisions,” the report says. That wording enrages veteran tenant activist Michael McKee, who calls it a carefully phrased “cop-out,” reneging on de Blasio’s campaign promise to support repeal.

Instead, the plan’s preservation initiatives will rely on intensified enforcement against housing-code violations and landlords who harass tenants, de Blasio says. He called 1269 College Ave., the Bronx building where he held the press conference, “a prime example” of such preservation. As public advocate in 2012, he named the building’s then-owner, Eli Abbott’s College Management, the worst landlord in the city. Tenants there complained about rats breaking into their refrigerators and ceiling leaks so bad they had to sit on the toilet with an umbrella, while rents averaged more than $1,100.

The building was rescued, explains longtime Bronx community organizer Harry DeRienzo, by a complex network of tenants, community groups, city agencies, legal services, a sympathetic bank, and a new landlord ethical enough to renovate the building while keeping rents down. Apartments there now cost $650 to $1,100, he adds—cheap by Manhattan standards, but not so cheap for Bronx residents.

Finally, the plan’s new housing relies on private developers, which means rents can’t be so low that it discourages them from participating. “To pay market rate for a site and create 50 percent affordability is clearly not feasible,” developer David Pickett said at the Brooklyn press conference.

The administration did not propose building nonprofit co-op developments like Electchester in Queens or Manhattan’s Penn South, says Deputy Mayor Alicia Glen, because it’s too hard to find large enough plots of land.

The result is that large groups of people will not be included in the plan. It does not specify how many apartments will be built for the city’s working poor, but the $40,000 a year it categorizes as “very low income” is middle-class next to a minimum-wage worker, for whom even a $600 rent would take more than half their income. The administration expects that the bulk of its preservation efforts will benefit the city’s middle class, households making roughly $42,000 to $67,000, but no new housing is slated for this group.

Several housing activists praised the “different tone” of the de Blasio administration. After 12 years of Bloomberg, who thought astronomical rents demonstrated the city’s success as a luxury brand, it’s good, they say, to have a mayor who cares about people being able to afford to stay here.

On the other hand, to solve the crisis, de Blasio has to deliver more than Clintonesque “I feel your pain” bromides about inequality. To make a significant dent in its housing shortage, the city really needs something on the scale of the Mitchell-Lama program, which from 1955 to the late 1970s built more than 100,000 apartments that were genuinely affordable to working- and middle-class people.

As of now, it appears that his administration’s plan may replicate the worst flaw of Bloomberg’s housing programs: In the name of “affordable housing,” building more apartments that cost more than $2,500 than ones that rent for less than $1,000.

A version of this article originally appeared on Gothamist.com.