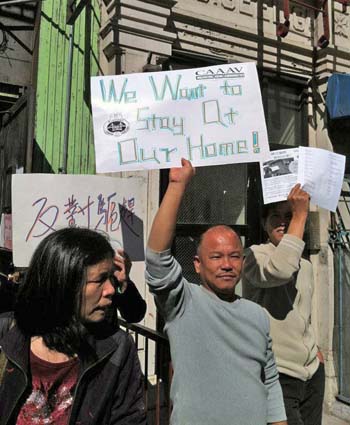 Rallying in front of their building on Sept. 23, the residents of 11 Allen St. in Chinatown heard unwelcome news from Karen Smith of the Real Rent Reform Campaign. “Don’t expect the courts to help you,” said Smith, a former State Supreme Court judge who left the bench to devote herself to tenant activism.

If the neighborhood were zoned residential, the lapse of commercial use would have supported the residents in court. Some of them have lived in the building for more than 20 years. But that section of Chinatown is entirely zoned commercial, so the lack of a residential certificate of occupancy will be held against them, even though the previous landlord collected their rents knowing that they lived there.

The illegal arrangement posed no problem to either the prior landlord or the tenants as long as the owner was satisfied with the rents he was collecting. But Chinatown is developing and gentrifying. Speculators are now looking for opportunities. And the commercial zoning allows for much larger buildings than the standing tenements. 11 Allen, for example, occupies less than 60 percent of the allowable bulk. A developer could demolish it to build a hotel nearly twice its size. Since all the tenants were allowed to live there without a legal certificate of occupancy, they can easily be evicted.

The building was a ready target for a predatory landlord. Even if the landlord had no intention of redeveloping, he could drive out all the current low-rent tenants, then apply for a residential certificate of occupancy and rent to market-rate tenants. In fact, Fei Wang offered to let the tenants stay if they paid twice their current rents, before he moved to evict them.

The evictions at 11 Allen are part of an increasing trend of mass evictions in Chinatown. These evictions are not for nonpayment, creating a nuisance, or illegal activity. They are real-estate-interest evictions, the direct consequence of hotel development, rising real-estate values and the gentrification of the surrounding neighborhoods.

The building at 11 Allen is not the only one in Chinatown that is threatened with commercial redevelopment. Chinatown is one of the densest residential neighborhoods in New York, but the commercial zoning benefits developers, not the residents or a stable community. It’s zoned for market swings, wherever they come from and wherever they lead.

That worries many people there. The 2010 census showed that the neighborhood’s Asian-American population declined for the first time in a century, shrinking by 17 percent since 2000. As the surrounding areas gentrify, development interests have increased rapidly, raising real-estate values and putting pressure on residential rents.

The Committee Against Anti-Asian Violence (CAAAV), one of the most active tenants’ rights advocates in the city, has been working hard with the residents of 11 Allen, although the prospects for their legal strategy are not good. The landlord will likely win because all the residential spaces are illegal. In a commercial zone, with a commercial Certificate of Occupancy, the tenants have little recourse in the courts.

The broad and necessary solution to the neighborhood’s stability is a rezoning. Four years ago, the Lower East Side, which borders Chinatown on the north and east, was rezone, in order to preserve the residential tenements characteristic of the neighborhood. In response to the high-rise hotels and luxury apartments that were spreading in the neighborhood, the City Planning Commission limited the size of new buildings. On certain streets, new construction cannot be built larger than the old buildings, which are mostly five or six stories. This eliminates an incentive for developers to raze buildings and construct larger ones.

But the commission did not include the Bowery or Chinatown in its rezoning. Some critics complained that by restricting building height and hotels in the Lower East Side, the new zoning would push developers into the Bowery and Chinatown. Proponents of the rezoning, however, insisted that limiting development on the Lower East Side would not necessarily affect the surrounding areas.

Two hotels had already appeared in Chinatown just prior to the rezoning. But the increase of hotel development since then is clearly evident: There are three new hotels within a one-block radius of 11 Allen St.

While the community debated whether the rezoning would harm the boundary areas by increasing development there, the Bloomberg administration viewed the situation from the exact opposite perspective. It welcomed development on the Bowery. It firmly and explicitly stated its desire to see the Bowery developed as a major hotel-revenue resource, between the high-end boutiques of Soho and Noho on its west side and the trendy gallery and nightlife strips of the East Village and Lower East Side on in its east.

The administration’s position about Chinatown was not clear. Consistent with the city’s history of ignoring Chinatown interests, the Planning Commission did not articulate any plan for the neighborhood. Chinatown planning did not seem to appear on the radar for the city at all until the Chinese Staff and Workers Association, a labor-activist organization, protested loudly against the neighborhood’s exclusion from the rezoning.

As a result of that highly public and heated protest, in 2008 the three community boards that contain part of Chinatown within their districts created a community planning board. This board, the Chinatown Working Group, included representatives of social-service, labor, and activist organizations, tenants unions, business interests, and property owners. It began an effort to rezone the neighborhood, intending to avoid excluding contiguous areas vulnerable to displacement. But their process has been slowed by that very inclusivity. It’s likely that any comprehensive rezoning will not be implemented for several years. Any protective rezoning will come too late for people threatened with eviction, like those at 11 Allen St.

CAAAV now hopes that an affordable-housing management organization will buy the building so the current residents can remain. That would save their homes, but will not resolve the general threat to the neighborhood.

Meanwhile, hotels are sprouting everywhere in Chinatown, replacing what was the oldest immigrant neighborhood in New York and driving out the last ethnic enclave in Manhattan south of Harlem. CAAAV, a member of the Chinatown Working Group, has begun its own rezoning effort to save the community from the threat of displacement and the tides and swings of marketplace development. It has produced a survey of the neighborhood and papers on housing and zoning, presented panels on community planning, created exhibits, and held rallies and protests.

Several other activists and leaders from nearby neighborhoods spoke at the Sept. 23 rally. They included Wasim Lone of Good Old Lower East Side, Rob Robinson of Take Back the Land Movement, and Marcia Ikonomopoulos of Kahila Kadosha Janina Synagogue.