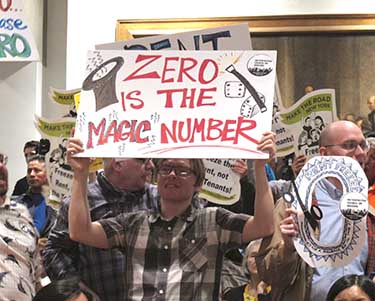 “So the dream of a rent freeze is out?” a woman in a Flatbush Tenant Coalition T-shirt asked.

The answer for this year is yes. In its preliminary vote Apr. 26, the city Rent Guidelines Board rejected a possible rent freeze for one-year lease renewals by the usual 7-2 vote. Then, as hundreds of angry tenants chanted “Shame!” and “We Had Enough!” and a few dozen pushed toward the stage, the board voted 5-4 to recommend allowing rent increases of 0.75 to 2.75 percent for one-year leases and 1.75 percent to 3.75 percent for two years.

All five public members voted as a bloc for the proposal. The RGB will vote June 26 on final guidelines for rent increases allowed on leases that begin on or after Oct. 1.

RGB tenant representative Sheila Garcia told the board that her rent-freeze proposal was “not based on ‘let’s feel bad for tenants,’ it’s based on data.” The board’s data, she said, showed that 56 percent of rent-stabilized tenants are spending more than 30 percent of their income on rent, and more than one-sixth are spending more than half of what they make. Meanwhile, she added, only two landlords applied to the state housing agency for “hardship” rent increases because they weren’t making enough profit, and both were denied.

No board members said why they opposed the freeze. “And these are de Blasio’s appointments,” one woman said afterward.

With tenant groups bringing in contingents from the Bronx, Brooklyn, Manhattan, and Queens, more than 300 tenants and supporters filled the Great Hall at Cooper Union for the preliminary vote. Chants of “Rent Freeze!” and “La renta sube, sube, el pueblo sufre, sufre” (the rent rises, rises, the people suffer, suffer) reverberated like snare drums in the arched lobby outside the hall.

“Tenants in New York City cannot afford rent increases,” said Rolando Guzman of Brooklyn’s United Neighborhood Organization at a rally in the lobby before the vote. “We want to remind the mayor that if he wants to reduce homelessness, the first step is keeping tenants in the house.”

In her building, said Nilda Rivera of Woodside on the Move, the landlord is trying to get a $133-a-room major-capital-improvement increase—$400 a month for a one-bedroom apartment.

Elaina Latrese B. of Fast Food Justice, one of several fast-food workers who turned out, said that even with their wages going up to $15 an hour, “we still can’t get decent housing in the city.” She pays $600 a month to share a Bronx apartment with her boyfriend and two roommates, and said many coworkers are homeless.

City Councilmember Ben Kallos (D-Manhattan) and Assemblymembers Richard Gottfried and Linda Rosenthal (both D-Manhattan) also spoke. Rosenthal remarked that she sees numerous empty storefronts on “the once-affordable Upper West Side,” and that if owners “feel they don’t need to collect rent on those empty stores, they’re not hurting.”

The board did vote 7-2 to recommend a rent freeze on rooming houses and single-room occupancy hotels, covering about 11,000 tenants Garcia called “one of the most marginalized groups in the city.” It has frozen rents in this category since 2012.

The RGB has three new members this year. Leah Goodridge, supervising attorney at Mobilization for Justice’s Housing Project, is the new tenant representative, replacing Harvey Epstein, who was elected to the Assembly. Public member Rodrigo Camarena, a former official of the city Department of Small Business Services, is a consultant for nonprofit organizations. Owner representative Angela Sung Pinsky is executive director of the Association for a Better New York.

Goodridge said her experience representing tenants in Housing Court taught her that even a small rent increase can tip them into eviction. “Sometimes even $25 a month makes a difference, even with a subsidy,” she told Tenant/Inquilino after the vote. “They’re not even hanging on to the boat, just a life jacket.”