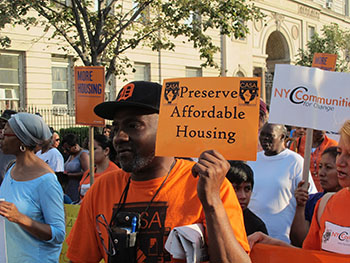 More than 1,000 people marched a half-mile up Adam Clayton Powell Boulevard in Harlem Aug. 20, demanding that at least half of any new housing that gets city aid be genuinely affordable.

The late-afternoon march, which followed a packed rally at the First Corinthian Baptist Church on West 116th Street, showcased the recent alliance between the city’s housing and community groups and its building-trades unions. Contingents from Laborers Local 79 and Plumbers Local 1, the District Council of Carpenters and the International Brotherhood of Electrical Workers Local 3, joined with those from New York Communities for Change, VOCAL NY, Make the Road New York, Los Sures from Williamsburg, and Community Action for Safe Apartments (CASA) from the Bronx.

“We need 50/50 now,” First Corinthian pastor the Rev. Michael Waldrop told the church rally. In Harlem, he said, apartments are renting for $2,400 a month while the median neighborhood income is around $30,000 a year, and developers are “asking poor people to leave in the most impolite manner.”

“Tonight 52,000 people will sleep in our shelters, one-third of them children,” said Public Advocate Letitia James. “We should build these homes union! Union! Union! Union!” she called out, the crowd chanting along with her. “I dismiss the argument that you cannot build affordable housing with union workers.”

“This is the first day of a long journey,” said Gary LaBarbera, president of the Building and Construction Trades Council of Greater New York. “The creation of affordable housing and good union jobs is waiting.”

The “50/50” demand, formulated by the march’s organizer, the Real Affordability for All coalition—of which Met Council is a member—wants all new residential buildings that get any kind of city benefit, such as a 421-a tax abatement or a zoning variance, to contain a minimum of 50 percent affordable housing. And “affordable” should be defined “in terms of the people who live in the neighborhood—not some distant number from Washington or Albany,” says Fitzroy Christian of CASA. In areas like the South Bronx, he says, that means building apartments that people who make less than $30,000 a year can afford, instead of using the federal “area median income” formula, in which the actual city median household income of around $50,000 is deemed “low income,” and $3,000 apartments can qualify as “middle income” housing.

“We want to make sure that these new developments don’t gentrify these neighborhoods,” explains Met Council executive director Jaron Benjamin. “In a place like East New York, it should be 100 percent affordable.” Even in Manhattan, he adds, there are still a lot of people who make 30 to 50 percent of area median income, roughly $25,000 to $40,000, and can’t afford most of the “affordable” housing built under Michael Bloomberg or planned under Bill de Blasio. 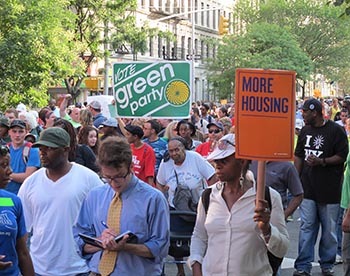 Affordable housing ‘has to change’

New York’s labor unions were once in the forefront of affordable housing. Developments like Electchester in Queens, built in 1949 by Electricians Local 3, and Penn South in Manhattan, built in 1962 by the International Ladies Garment Workers Union, were constructed by union labor and are still among the city’s cheapest apartments more than 50 years after they opened.

More recently, though, the city’s housing advocates and construction unions have often found themselves on opposite sides. For affordable-housing advocates, Bloomberg-era megadevelopments like Atlantic Yards and Hudson Yards meant gentrification and displacement, far more than the token amount of not-so-affordable housing they promised. For the building-trades unions, they meant jobs, lots of jobs.

That is changing. Building-trades representatives, including LaBarbera and rank-and-file members of the Laborers and Ironworkers, began turning out at affordable-housing rallies early this year. One reason is that luxury-housing developers, who can well afford to pay union wages, are increasingly hiring nonunion contractors, such as at Stella Tower on West 50th Street in Manhattan and Riverwalk 7 on Roosevelt Island.

Rasul Heatley, a Laborers apprentice from Harlem, told the church crowd he’s worked both union and nonunion jobs, and there’s no comparison. On the nonunion jobs, he said, “I’ve seen workers who work a full day and can’t afford to pay rent for their families,” as well as injuries and shoddy construction.

“We’re calling for economic justice,” he added. “The last few projects I built on, I can’t afford to live there.”

A second reason is that the 80,000 “affordable”—that is, below market rate—apartments the de Blasio administration plans to have built will be a substantial amount of the construction work available in the city over the next 10 years, especially as they will be included in market-rate buildings. The problem is that if the mechanism for financing them is basically trickle-down from luxury development, with a few more lower-rent units added by inclusionary zoning, an easy way to ensure that developers still make a large profit is by letting them build nonunion and pay lower wages.

In the 2,300-apartment complex being built on the former Domino Sugar factory site in Williamsburg, developer Jed Walentas’ Two Trees Management agreed to raise the number of below-market units to 600 after the de Blasio administration allowed them to increase the buildings’ size to 55 stories. Two Trees is using union workers for specialized jobs like crane operators and electricians, but nonunion crews for more general labor.

Some building-trades union officials have indicated that they might be willing to allow lower wages for work on affordable-housing developments, although they are unwilling to speak in public, as negotiations are still going on and involve numerous parties. But they say that many affordable-housing developers and the contractors they hire are exploitating workers, paying low wages and failing to provide benefits, cover workers’ compensation, or take adequate safety precautions. If the planned affordable housing is not built union, that would give those employers a large share of the city’s construction, further undermining union wages and standards.

The affordable-housing business “has to change,” LaBarbera told the church rally.

So this alliance, says Benjamin, is a way to demonstrate to the de Blasio administration that they can’t play labor and tenants against each other. It will also force the city and state to negotiate with developers “who aren’t so greedy.”

‘Not everyone has money’

Meanwhile, the marchers headed north for 125th Street were thinking about the rapid-fire displacement happening all around the city. “Our neighborhood’s getting overrun. It’s ridiculous,” said Barbara Schliff of Los Sures, which brought about 40 people from Southside Williamsburg. “Landlords want $3,000 rents, to get all the people out of the rent-stabilized apartments. Our kids can’t live here anymore.”

“Everybody has a right to live in affordable housing,” said an elderly woman who gave her name as Miss Thomas, her island accent still strong and musical more than 45 years after she immigrated from Jamaica. “We don’t care who comes in to Harlem to live, it doesn’t matter what nationality, but they don’t have a right to push us out. Not everyone has money. It’s not right.”