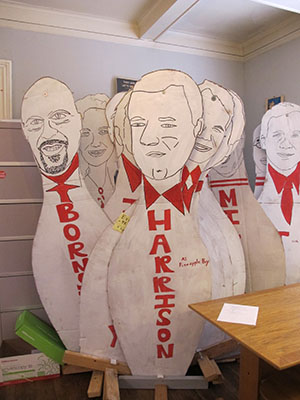 SAN FRANCISCO—This November, voters in San Francisco have a chance to discourage real-estate speculation by enacting a stiff tax on fast-turnover property sales.

The Proposition G ballot initiative would levy a tax of 14 to 24 percent on the sale price of multi-unit residential buildings if the owner sells the property within five years of acquiring it, with buildings sold within one year taxed at the highest rate. It would exempt owner-occupied buildings, housing reserved for low- and middle-income people, and buildings with 30 or more apartments.

“We’re pretty confident it will pass,” says Andrew Szeto, an organizer with the San Francisco Tenants Union (SFTU), one of the sponsoring groups. Former City Supervisor Harvey Milk, the nation’s first openly gay major-city elected official, proposed a similar tax before he was murdered in 1978.

The measure, developed by a coalition of tenant and community organizations in February, is intended to “stop real-estate flipping” and ease the city’s housing crisis. San Francisco has gentrified rapidly under an influx of tech-industry money. Two-bedroom apartments commonly rent for $4,000 a month. Evictions increased by 38 percent from 2010 to 2013, with the number passing 1,700 a year in a city of 825,000 people. Homeless people are highly visible downtown, despite frequent crackdowns.

San Francisco’s housing crisis may resemble New York’s more than any other U.S. city does. Like New York, it’s a city with a limited amount of space—especially space accessible by public transportation—that has always drawn immigrants, artistic types, and job-seekers, and it has recently been inundated with a tsunami of money that has driven housing costs beyond the reach of most residents. AirBnB recently advertised a room in the North Beach neighborhood for $800 a night, and a new luxury high-rise touts its $4,300 one-bedrooms as a dormitory for workers at the Twitter headquarters half a block away. There is “no affordable housing,” Szeto says flatly.

The city enacted rent control in 1979. It now covers slightly more than three-fourths of the estimated 222,000 rental units, with around 10,000 apartments lost to rent control since 2005. As in New York, a state law, from 1995, bars local governments from strengthening their rent regulations. The system usually limits annual rent increases to around 1 percent, but landlords can charge market rate for vacant apartments, although they remain rent-controlled after that increase. To get tenants out, says Szeto, owners offer them buyouts, threaten to evict them, or abuse the “owner move-in” provision in the law.

The major loophole, however, is the Ellis Act, a 1980s state law that lets landlords evict tenants if they are selling their property and—in theory, at least—going out of the real-estate business. “It’s mostly used by speculators to evict rent-controlled tenants,” says Szeto. “They aren’t getting out of the business.” Speculators, he explains, use limited-liability corporations to pretend that they’re selling their buildings to an unrelated entity: One of the most notorious, Michael Harrison’s Vanguard Properties, had an LLC called Pineapple Boy Express. 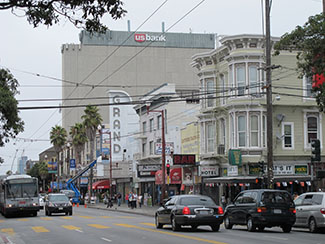 According to the Anti-Eviction Mapping Project, Ellis Act evictions have increased by 170 percent in the last three years. From 2009 to 2013, more than half of Ellis Act evictions were filed within a year of the landlord acquiring the property, and almost 80 percent were filed within the first five years. Most came in a handful of neighborhoods, including the Haight-Ashbury; the Castro, the city’s gay and lesbian capital; the Western Addition, once largely Afro-American; and Richmond, middle-class and largely Asian.

The biggest single number came in the Mission, a mostly Latino neighborhood with a strong artist-bohemian presence that’s a main frontier of gentrification. It’s about a mile directly southwest of the booming downtown tech-business district, one stop further out on the BART regional subway line. Mission Street, its main drag, is still lined with taquerias, theatres, and vegetable stands vending tomatoes and avocados, but Valencia Street, one avenue block west, has shops offering “small-batch chocolate” and $94 stackable plastic chairs.

Proposition G emerged after efforts to reform the Ellis Act failed in the state legislature. After neighborhood meetings in the Mission, Castro, Richmond, and elsewhere, more than 600 people attended the Citywide Tenants Convention in February, from groups that included the SFTU, the Housing Rights Committee, Causa Justa, the AIDS Housing Alliance, and Chinatown Community Development. They voted to make taxing speculators their top priority.

Mayor Ed Lee has promised to increase the supply of affordable housing by adding 30,000 units by 2020. Only 10,000 of these will be affordable to poor and middle-income people, however, and almost half of those will be renovated public-housing apartments. Only 5,500 of will be newly built. The mayor is “pro-growth and not very supportive of the tenant movement,” says Szeto. Lee is also under some political pressure to have more of those affordable units go to “middle-income” people. San Francisco’s area median income: about $67,000 for a single person and $97,000 for a family of four, which would mean $1,675 for a studio and $2,425 for a two-bedroom.

The city’s inclusionary-zoning laws are relatively weak, says Szeto. Developers are now required to have 12 percent of the units they construct below market-rate, but they can build them in a different area or merely contribute to an affordable-housing fund. Some of the planned mixed-income developments would bring luxury housing to the historically poor neighborhoods along the waterfront in the city’s southeast corner. Tenants want the affordable housing built first, says Szeto.

Proposition G wouldn’t ban speculation, he adds, but it would deter it. So far, it’s been endorsed by the city Democratic Party, the Central Labor Council federation of local unions, and four of the 11 members of the Board of Supervisors.

If it passes, the real-estate lobby is expected to challenge it, Szeto says. Owners are already suing to strike down a city law that requires them to help relocate people they evict under the Ellis Act.