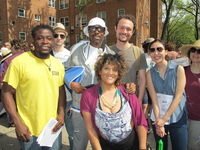 While thousands of people rode buses to Washington for the People’s Climate March April 29, some 250 were trekking more than four miles between housing projects in western Queens for a local sister march subtitled “NYCHA Takes Action.”

The march was conceived as a way of involving public-housing residents, who live in communities that are disproportionately affected by environmental problems but aren’t “front and center at a political action in D.C. for a myriad of barriers,” says Jerome Nathaniel of the Queens Action Coalition, which organized it. “People might be newer to the movement, but they’re exposed a lot more to the consequences,”

Beginning at the Woodside Houses near 50th Street, the marchers headed northwest on Broadway, past the Adriatic Meat butcher shop and the Manjares Mexico and Saffron Indian Cuisine restaurants. “I need to have a planet for this little guy,” said Jessica Ramos, 31, of Jackson Heights, pointing at her 5-year-old son as they walked north on Steinway Street, chanting “Believe it, feel it, climate change is real.” The boy wore a green headband with a blue-green image of the Earth drawn in crayon by his 3-year-old brother.

They turned west on Astoria Boulevard above the Brooklyn-Queens Expressway, past the Q100 bus wending its way to Rikers Island, and stopped for a rally at the Astoria Houses. They threaded between the luxury apartment buildings, the decaying wooden piers, and the Socrates Sculpture Garden on the waterfront along Vernon Boulevard to a refreshment stop at the Ravenswood Houses, then continued past the auto-body shops on 21st Street and the behemoth “Big Allis” power plant before culminating at the Queensbridge Houses.

“It’s been a long time coming, but today is the answer to my prayers,” said Claudia Coger, the 82-year-old president of the Astoria Houses resident association. Still, few public-housing residents joined.

Jack Chen, 43, a high-school technology teacher from Bayside, said he came because the Trump administration is “putting us in the wrong direction” instead of developing clean, sustainable energy sources such as wind and solar power. “Around here, there’s so many tidal-power opportunities.” 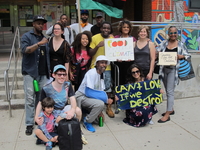 Amy Chanin and Nallah Sutherland, both 18 and wearing matching Harvey Milk buttons, came down from Rockland County after deciding not to go to Washington. “To get the word out, you really need to talk to people in your local communities,” Chanin said. “It’s more unifying. It’s a lot more intersectional.” Gabe Falsetta and Tina Nannarone, elderly leftists from Forest Hills, came after waiting two hours for a bus to D.C. that never showed up.

Teacher Anne Lenzini brought eight students from her social-justice class at Park East High School in East Harlem. “They didn’t want to get up at 5 in the morning to go to D.C.,” she said.

“We want to make people know that climate change is a big problem. There has to be a change,” said Cenaido Torez, 17. He grew up in East Harlem, was diagnosed with asthma when he was 3, and says “I don’t want others to go through the things I did.”

Joseph Jamison of the Queens Peace Council said he was pleased that public-housing residents were leading the march, because the environmental movement “made a big fuss” when Donald Trump announced plans to move federally owned land back into the private sector, but says “very little about environmental justice.”

Western Queens is an underestimated source of activism, he said, because it’s not as politically organized as the middle-class liberals of eastern Queens or the black community in Jamaica and the southeast.

In the Long Island City projects, march leaders say, “food justice” and asthma are more immediate concerns. “Climate change is something a lot of people see from afar. Your child not being able to breathe is right in front of you,” said Andre Stith, 47, organizing director for the local educational-services nonprofit group Zone 126, who lives in the Astoria Houses. “Very seldom do people put the two together.” For people who have to deal with making their rent, getting the Housing Authority to make repairs, crime, and police violence, he added, “climate change might be number 11 on their top ten list.” 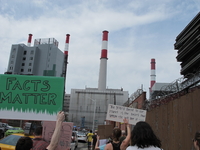 Food justice, Nathaniel explains, is about empowering the people who grow, transport, sell, and eat it. It’s much healthier for people if they can get fresh fruit and vegetables beyond the browning bananas and sprouting onions often found in poor-neighborhood groceries. It’s also better for the environment if they’re grown without pesticides and not trucked long distances.

He works for City Harvest, a group that gives out donated produce, canned food, and restaurant surplus, and works with bodegas and small groceries to try get them to improve their produce. Helping people eat healthier, he adds, also has to be “culturally competent”—giving them food they know how to prepare.

You can’t “just flop in Asian pears,” he says. “I’m from East New York. I didn’t start eating kale until four-five years ago.”

In the Astoria Houses’ community gardens, Coger says, residents can only grow fruit and vegetables in raised beds, because the soil is too toxic. Between that and asthma, she adds, “we’re not even talking about climate change.”

The Long Island City- Ravenswood-A s t o r i a waterfront is not the neighborhood worst affected by asthma. In the South Bronx, East Harlem, and parts of eastern Harlem, the number of emergency-room visits by children and teenagers for it averages more than 600 per 10,000 people, according to state Department of Health figures from 2012-14. Still, according to a 2014 report by Zone 126, asthma is the most common cause of hospitalization for children under 14 in the three waterfront ZIP codes, and many students miss 10 to 30 school days a year because of it.

“I know of kids who have five medications to stay well on asthma. When they turn six, it jumps up to nine,” City Council Environment Committee chair Costa Constantinides (D-Astoria) said after a short rally at the Astoria Houses.

He’s introduced a bill to prohibit power plants in the city from burning particulate-heavy No. 6 oil by 2020. “It’s the worst stuff they can burn,” he said. It looks like black tar.” The two power plants in his district, the 2,480-megawatt ‘Big Allis’—which produces about one-fifth of the city’s electricity—and the Astoria Generating Station, burn 6 to 15 million gallons per year of it, according to various estimates. The bill would also phase out No. 4 heating oil, still used by 3,000 buildings, by 2025.

The city Department of Health calls particulate pollution, solid and liquid particles less than 2.5 microns in diameter, “the most harmful urban air pollutant,” as the particles are small enough to penetrate deep into the lungs. While the department’s New York City Community Air Survey, released in April, found that particulate pollution has declined significantly since the winter of 2008- 09—when much of the city averaged more than 13.7 micrograms per cubic meter—Midtown Manhattan, Long Island City-Sunnyside-Maspeth, and Greenpoint remain hot spots. Queens Community District 2, which stretches from Woodside to the Long Island City waterfront, ranked seventh of the city’s 59 in 2015, and was the second-highest outside Midtown, after Williamsburg-Greenpoint in Brooklyn.

“You really need to link the conversation around asthma to climate change,” Nathaniel said the day after the march. “We’re trying to live day to day, and we forget to live decade to decade, which is what climate justice is about.”

While not many residents of the buildings the march visited joined it, he says, “We were obviously noticed, we were heard. A lot of people heard us and said, ‘wow!’”

Er ykah deJesus, a Queens Action Coalition organizer who lives in the Ravenswood Houses and works for Big Reuse’s compost project, agreed that the rally was a first step, that the coalition is still developing a network that can bring out public-housing tenants.