It doesn’t look like there’s going to be another rent freeze this year. 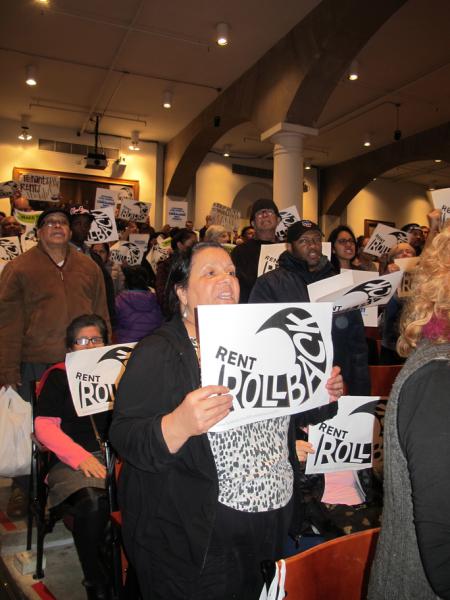 By a 5-4 vote with no debate, the city Rent Guidelines Board on Apr. 25 recommended allowing increases of 1 to 3 percent for a one-year lease and 2 to 4 percent for two-year leases in the city’s about 1 million rent-stabilized apartments. RGB chair Kathleen Roberts, who proposed the increases, offered no explanation or rationale for them, and did not stick around to answer questions afterwards.

“I think it’s really disappointing that the chair did not explain why she voted for a rent increase,” tenant representative Sheila Garcia said.

“I’m very upset,” said Inwood-Washington Heights activist Graham Ciraulo, noting that his building didn’t have gas for seven months and his landlord has been illegally deregulating apartments. “There shouldn’t be an increase until they curtail the illegal activities of these landlords.”

“What about somebody who has a fixed income and the rent is more than their income?” asked Beverly Rivers, 61, a disabled former day-care worker who lives in Prospect-Lefferts Gardens with her daughter and two grandchildren. “That s what I have to live on. I need a rent rollback. I don’t want to be homeless.”

Mayor Bill de Blasio told WNYC radio Apr. 28 that the proposed increase was justified because “the price of fuel has started to come back up.” The decision was “based on the facts… no bias towards the landlords, but actually going by the numbers,” he continued, adding that the board was “finally respecting tenants as much as they do landlords.”

The suggested increases are “inadequate,” contended Jack Freund, vice president of the Rent Stabilization Association, which had advocated increases of 4 percent for one year and 8 percent for two years. The board’s Price Index of Operating Costs (PIOC), an estimate based on the cost of goods and services such as fuel and plumbing, went up by 6.2 percent last year, a total increase of 11 percent over the last four years, he added. 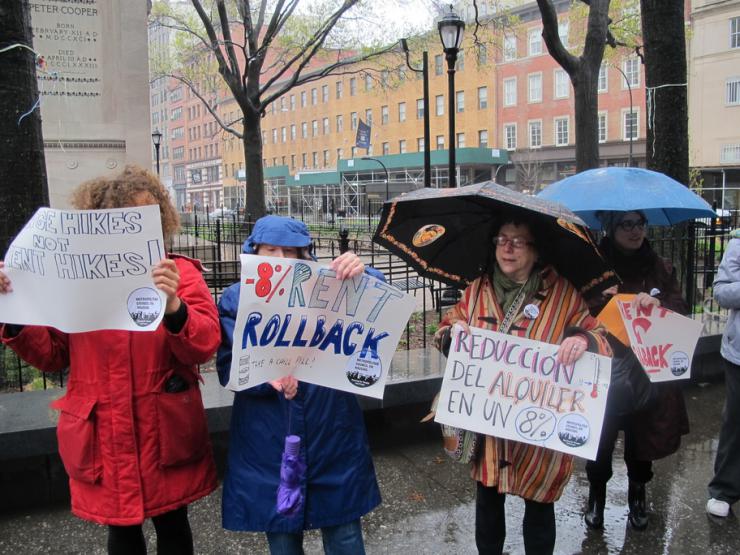 The RGB’s two landlord representatives cited that figure in proposing slightly smaller increases, 4 percent and 6 percent. It was defeated 7-2.

Despite a crowd of more than 200 people singing “A rollback is what we need,” the board rejected a rent-reduction order proposed sentatives, also by 7-2. It would have allowed landlords to increase rents by zero to 2 percent—but only in buildings where they hadn’t used a vacancy, major-capital-improvement, or individual-apartment-improvement increase to raise rents in the past three years. In those buildings, rents would be reduced by up to 4 percent for a one-year lease, and up to 2 percent for two years.

The PIOC may have risen to 6.2 percent last year, Garcia argued, but the RGB’s Income and Expense study found that owners’ average income had increased 4.4 percent in 2015, the most recent year data were available, while their actual expenses went up only 1.1 percent, and their net operating income grew by almost 11 percent—“the 11th consecutive year that Net Operating Income has increased,” the study said.

In dismissing the RSA’s challenge to the RGB’s rent freezes of 2015 and 2016, she added, a state Supreme Court judge had held that “we can consider affordability.”

Tenant representative Harvey Epstein told the board that 35 percent of rent-stabilized tenants spend more than half their income on rent, the city is experiencing record homelessness, and 43 percent of people entering city homeless shelters have lost rent-stabilized apartments.

“We think the data’s with us,” he said after the vote.

City Councilmember Ben Kallos (D-Manhattan), who spoke at a rally in the rain before the meeting, said it would take “rent freezes for the next ten years” for tenants to catch up with the unwarranted rent increases given during Mayor Michael Bloomberg’s administration.

“The rent is out of control. You’re supposed to use one-third of your income for rent, but I’m using almost half,” said Gustavo Madrigal, 25, an immigration paralegal who came from Queens with the Ridgewood Tenants Union.

In the South Bronx, said Lourdes de la Cruz of CASA, two-bedroom apartments typically go for $1,400 to $1,500, about half of all tenants spend more than half their income on rent, and a quarter live below the poverty line. Citywide, she said, landlords have made $950 million from major-capital-improvement rent increases over the last five years.

“There are plenty of programs” to help lower-income people pay rent, Freund told Tenant/Inquilino when asked about affordability. “Rent stabilization holds rents low regardless of income.”

The board’s failure to explain why it recommended a rent increase—both of the tenant representatives said they had not been told the reason—prompted speculation that de Blasio had decided that after two years of rent freezes, it was time to give landlords something. The lack of debate echoed the Bloomberg-era RGB, when it was a foregone conclusion that the tenants’ proposal would be defeated 7-2, the landlords’ by the same margin, and then a public member’s proposal for a somewhat smaller increase would win 5-4, with none of the public members saying anything. Bloomberg always denied that he dictated what the increase would be, but he fired the only public member who ever voted for a tenant proposal.

Clara Joseph, a retired court reporter who’s lived in Park Slope for 50 years, was one of the protesters calling for a rent rollback. She said having a rent-stabilized apartment had helped enable her to put her children through college, because “they didn’t have to move constantly.” Now, she says, “my daughter has two master’s degrees and she can’t afford to move back to my neighborhood.”

She noted that a homeless shelter is being built across the street from her apartment, “for families that have been displaced from that very community.”

It’s “transitional,” she said, which means they can only live there temporarily before going out to face the housing crisis again.

A better alternative, she added, would be “building low-income housing, or better yet, not displacing people.”

“Tenants can’t afford to pay more, and landlords don’t need additional income,” Met Council said in a statement after the vote. “The one-year rent freezes in 2015 and 2016 merely maintained this unacceptable status quo. Rents need to be rolled back substantially to undo four decades of unwarranted increases that created the current affordability crisis. We are shocked and dismayed that the RGB did not even consider a rollback, or a freeze at current unaffordable levels, in the range of what they are considering this year. Mayor de Blasio’s public-member appointees should know better.”