Mario Mazzoni, Met Council’s outgoing executive director, has held things together for the last four years during tumultuous times for tenants. After helping recruit Jaron Benjamin as his replacement, he recently took a job as tenant advocacy coordinator with the Northern Manhattan Improvement Corporation, a Washington Heights-based community organization.

“I’m glad to have helped push the citywide tenant movement into a more aggressive posture,” he says. “For a long time the platform was basically reactionary. Now we are at a more visionary place, where we can demand and win not just tweaks to the system, but fundamental reform to make the rent laws actually preserve affordability and keep people from being forced out, and cover people who have never been protected.” He believes that the next time the laws are up for renewal, in June 2015, will be critical. To win, he thinks the tenant movement must be much better organized and much more militant. 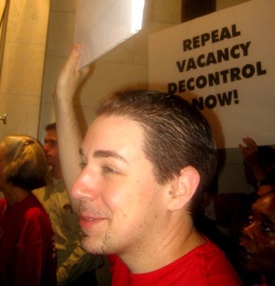 Mario was elected to the Metropolitan Council on Housing board in 2007, after working with Kenny Schaeffer and other members to oppose Columbia University’s takeover of a huge swath of his West Harlem neighborhood. When asked to take a staff job, he leaped. “I saw it as an incredible opportunity to have a real impact on the entire city, not just one neighborhood. I was excited to work for an organization whose members were willing to use confrontational tactics and stick their necks out for the cause.”

During his four years on staff, Mario was arrested twice in civil-disobedience protests. The first was when a dozen members of the Real Rent Reform Campaign blocked the entrance to 250 Broadway, where many state legislators have offices, to protest the state Senate’s failure to repeal vacancy destabilization. The other time was when four people chained themselves to the entrance to Cooper Union as the Rent Guidelines Board was preparing to vote for more rent increases.

Under his direction, Met Council expanded its services, recruiting and training new volunteers for the telephone hotline. “A lot more people realize that Met Council is the go-to place when you have a housing problem,” he says. “It is miraculous when you realize that the hotline is staffed by volunteers. We receive referrals from so many sources, even from 311. And we have worked to integrate the help we give through the hotline with organizing, to recruit new tenant activists.” Mario was also responsible for Met Council’s new Web site, with information and resources for tenants.

“I like working with individual tenants,” he says of his new job at NMIC. “Of course, you cannot address chronic problems one person at a time. If the laws are not adequate, there is not a lot you can do to help.”

Washington Heights has the highest concentration of rent-stabilized apartments in the city, so most tenants there have basic protections. Mario had a different experience in the Bronx, where he staffed the information table for Housing Court Answers. Many tenants facing eviction there did not live in rent-regulated apartments, so when their landlord refused to renew their leases, “all I could suggest was to negotiate with their landlord for more time to move out.”

Mario grew up in Washington State and came to New York in 1997 at the age of 18, enrolling in New York University and then getting a master’s degree from Columbia Teachers College. He taught in public high schools for three years, but didn’t find it a good match for his skills, particularly amid the Bloomberg administration’s changes. “This is a bad time to be a teacher,” he says. “The failings in our educational system as a whole are being blamed on teachers.”

“I have every intention of remaining an active Met Council member,” Mario adds. “We are in a crisis and we can’t say, ‘we need to fix this someday.’ We have to win significant reform in the next couple of years if there is any chance of saving the city.”